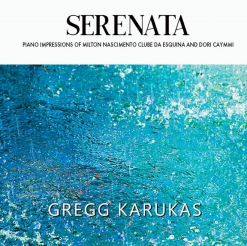 Gregg's Website Gregg's Artist Page on MainlyPiano
Album Links
Amazon (referral)Apple/iTunesSpotify
This site contains affiliate links to products. We may receive a commission for purchases made through these links.
Serenata
Gregg Karukas
2021 / Atrain/Nightowl Recs
55 minutes
Review by Kathy Parsons
With Serenata, his first solo piano album in a long and illustrious career, Gregg Karukas dazzles, not with piano pyrotechnics, but with subtle nuance and a deep love for this music. A mix of new and re-imagined original compositions along with “piano impressions” of Brazilian artists Milton Nacimento, Clube da Esquina and Dori Caymmi, Karukas clearly demonstrates that, in the right hands, great music (and great musicianship!) defies genres and categories to enrich the ears and hearts of anyone willing to take some time to listen. Calling the project “a labor of love that came out of the isolation of the last few months,” the album was initially inspired by a rediscovered cassette tape of his live performances from the 1990’s with Dori Caymmi and Ricardo Silveira at Le Cafe in Los Angeles. One evening, Karukas sat down at the piano and played some of the pieces from memory - a deeply emotional experience that set him off on a new adventure to create this wonderful collection of 15 solo piano gems.

A Grammy Award winner, Gregg Karukas’ 30+ year career as a keyboardist/ composer/ producer has included twelve solo albums, many #1 radio hits, touring with a variety of artists that include Sergio Mendes and Melissa Manchester, being a founding member of The Rippingtons, contributing to more than 100 albums, and sessions for many films and television shows. He has recorded and played on the world’s biggest stages with many of his Brazilian musical heroes, including Montreux Jazz with Caymmi, and multiple shows at the Hollywood Bowl with Ivan Lins, Oscar Castro Neves, Tom Jobim, Toots Thielemans, Mendes and Caymmi. Serenata brings this musical "love affair" full circle - “a crossover treat from the heart, for the heart” (Karukas’ words).

The album begins with “Travessia” by Fernando Brant and Milton Nascimento - a beautifully wistful and dreamy piece that sets the tone of the album. “Ponta de Areia,” also composed by Brant and Nascimento, conveys a warm, soothing energy in a relaxed and understated style. The title track, a Karukas original, has a sweet, simple melody that floats on the flowing left hand broken chords - a favorite! “Tudo O Que Você Podia Ser” by Lô Borges and Marcio Borges combines a jazzier, more rhythmic style with a beautifully poignant melody. Karukas’ “Better Days” is another favorite - simple, direct and from the heart. “Sound of Emotion,” (Karukas) feels like an intimate conversation without words - I love it! “Paisagem da Janela” by Fernando Brant and Lô Borges is a light and breezy bit of musical sunshine. Karukas’ tender, loving “Dori’s Song” is a heartfelt tribute to a dear friend. He also composed "Para Sempre (Until Forever)," a reflective and deeply emotional soul searching at the piano, perhaps late at night by the light of a candle - my favorite piece on the album. The last two tracks were also penned by Karukas. “Lament (Final Embrace)” is a heartbreaking goodbye that goes far beyond any words to describe it, and “Long Ago” brings the album to a very peaceful, serene close.

I sincerely hope that Serenata is just the first in a long series of solo piano albums by Gregg Karukas and predict it will be one of the best and most honored albums of 2021! It is available for downloads and streaming from Amazon, Apple Music/iTunes and various streaming sites including Spotify. The CD is available from www.karukasmusic.com and Amazon.

February 6, 2021
This review has been tagged as:
Jazz
Gregg's Website Gregg's Artist Page on MainlyPiano
Album Links
Amazon (referral)Apple/iTunesSpotify
This site contains affiliate links to products. We may receive a commission for purchases made through these links.