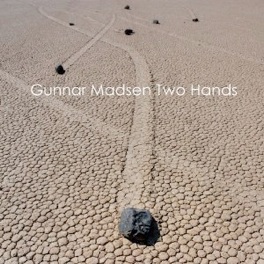 Gunnar's Website Gunnar's Artist Page on MainlyPiano
Album Links
Amazon (referral)iTunes
This site contains affiliate links to products. We may receive a commission for purchases made through these links.
Two Hands
Gunnar Madsen
2009 / G-Spot Records
61 minutes
Review by Kathy Parsons
It’s a daunting task to adequately introduce an artist with Gunnar Madsen’s experience and diverse background in a few short sentences. He is an award-winning composer, singer (The Bobs a capella group), pianist, writer, sound designer, filmmaker, and actor. He has composed and written music and books for all age groups, acted in stage plays and musicals as well as films; he has received commissions from Lincoln Center, the Los Angeles Theater Center, the Minnesota Opera, Oberlin Dance Collective, and on and on. Two Hands is Madsen’s eighteenth album to date, and is comprised of fifteen original solo piano compositions and three pieces for piano and violin. (Violinist Irene Sazer of The Turtle Island String Quartet appears as a guest artist.) While the album is very cohesive as an entity, there is variety in the music that reflects Madsen’s wide range of life and artistic experience. Deeply personal and often cinematic, the music conveys an abundance of emotions without becoming overly complicated or flamboyant. This is the music of a very accomplished artist speaking from his heart via the piano. Recorded on the much-loved piano at Skywalker Sound, the audio quality is stellar. Two Hands is certainly in the running to be one of my favorite albums of 2010.

Two Hands begins with “Break Into Blossom,” a soft-spoken piece that suggests hope and optimism. “In These Lonely Regions” was inspired by a line from a poem by Neruda as well as the passing of a favorite uncle. Very spare and open, strong emotions are expressed with a minimum of notes. “Kerenyi” was adapted from a play Madsen wrote in 1981. Dark and mysterious as a piano solo, the violin enters about 1/3 of the way into the piece and casts an even more haunting spell. “Nino and Me” is a lovely romantic waltz with a tender and graceful melody - very visual. “The Blackbird Whistling” is one of my favorites. Inspired by Wallace Stevens’ poem, “13 Ways of Looking At a Blackbird,” it more than hints of Erik Satie. The title could also be a nod to Satie’s odd titles and playing instructions. Most of the piece is very slow, spare, and flowing, trailing off at the end - exceptional! “Bandon” refers to a town on the Oregon Coast where Madsen’s great aunt and uncle had a cranberry farm that he visited one summer as a young boy. It’s the music of memories - simple and uncluttered. “For Wendy” was Madsen’s first composition, written for a girlfriend years ago. The heartfelt emotions convey the unbridled passions of youth. “Down Moon” gets me every time I hear it and is my favorite piece on this excellent album. Very dark and melancholy with occasional flickers of hope, it really makes my fingers itch (sheet music???)! I also really love “Oak Sky.” Simple yet incredibly moody, it says so much with so little. “Red Bird” ends the album with a gorgeous piano/violin duet that is perhaps the most cinematic piece of the album. Dark and expressive, it’s an evocative musical dialog between two artists.

Two Hands is an incredible musical experience that I very highly recommend. It is available from www.gunnarmadsen.com, Amazon, CD Baby, and iTunes. Check it out!
June 25, 2010
This review has been tagged as:
Kathy's Favorites: 2010
Gunnar's Website Gunnar's Artist Page on MainlyPiano
Album Links
Amazon (referral)iTunes
This site contains affiliate links to products. We may receive a commission for purchases made through these links.