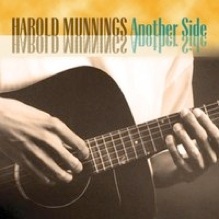 Harold's Artist Page on MainlyPiano
Album Links
iTunes
This site contains affiliate links to products. We may receive a commission for purchases made through these links.
Another Side
Harold Munnings
2007 / Harold Munnings
16 minutes
Review by Michael Debbage
If you were to do a Google search on Harold Munnings, the first entry would most likely list those associated in the medical field. One would begin to think that something had gone wrong with the world famous search engine but the reality is that Google would still be spot on. Harold Munnings is a fully qualified gastroenterologist by day; however, the appropriately titled EP Another Side shows the creative musical side of a gentle guitarist who presents his soft breezy smooth jazz approach much in the vernacular of the more famous Earl Klugh.

Though released three years ago, Another Side found its beginnings back in 1988 when Harold began to compose “Kelly’s Song”, whose melody finds inspiration in the music of the previously mentioned Earl Klugh. Though Munnings borrows from Klugh, his style includes his own musical voice that is as gentle and invigorating as the warm tropical breezes you would find in his native lands. The all too brief disc opens with “Kelly’s Song” that also includes the self penned “Sunsets Over Old Fort Bay” that softly shimmers with percussion washed in keyboard strings around Harold’s guitar work. The downside is that the song is way too short. Harold also includes the monster smash hit “Lovin’ You” written by the late great Minnie Riperton with his own stellar interpretation. This will certainly send you back to the mid seventies but his exposition on Minnie’s creation is honorable yet more contemporary.

Doctor by day and musician by night, Munnings has a very busy and full life. In addition to these occupations, Harold has also somehow found the time to write several books. That said Another Side is impressive enough that this tender guitarist may want to consider creating a full length album and share more of his musical voice to the general public.
May 22, 2010
This review has been tagged as:
Guitar musicJazz
Harold's Artist Page on MainlyPiano
Album Links
iTunes
This site contains affiliate links to products. We may receive a commission for purchases made through these links.