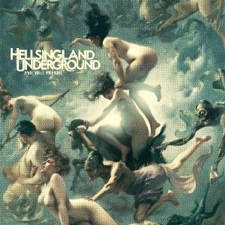 One look at their latest album cover of Evil Will Prevail one would expect the speakers to spew heavy metal riffs with praises to Satan but quite the contrary. While lyrically there are some darker themes explored here and there, musically Hellsingland Underground is an extraordinary band that ferments a very organic musical experience of layered acoustic and electric guitars merging with keyboards, harmonica's and terrific vocal harmonies, but never boring. In fact, take the harmonies, harmonica of the delightful English folk rockers Lindisfarne and merge it with some of the swag of southern rockers Lynyrd Skynyrd along with a healthy dose of their own secret potion, then shazam you are in Hellsingland Underground.