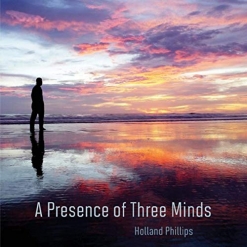 Holland's Website Holland's Artist Page on MainlyPiano
Album Links
Amazon (referral)Apple Music
This site contains affiliate links to products. We may receive a commission for purchases made through these links.
A Presence of Three Minds
Holland Phillips
2019 / Ageless Records
45 minutes
Review by Kathy Parsons
The story behind Holland Phillips’ eighth album, A Presence of Three Minds, is almost as interesting as the music itself. About a year ago, Phillips found himself in an unusually creative period where the music just kept coming. Before releasing Leaning Toward Home (2018), he had almost enough material for his next album. Soon after that, a series of personal losses and unexpected events caused a four-month break in composing and working in the studio. Phillips’ original intention for this album was to focus on the theme of water and raising awareness of how important saving our waterways is to our own existence. “But a deep sadness kept getting in the way, so a set of the songs naturally emanated from that direction.” A third set of pieces also started to flow, influenced by a fantasy novel Phillips had written. With such varied sources of inspiration, the dilemma became whether to go in one direction and leave the other two for later or to see if all three could work together. “After a moment I realized that there really was no choice at all/ I must take all the paths at once” (quoted from the poem on the back cover of the CD). With all of that in mind, it is amazing how cohesive the album is. There is variety in the moods and instrumentation in the eleven tracks, but there are no jarring transitions from one piece to the next. A classically-trained musician, Holland Phillips wrote all of the music and performed it on piano, synthesizers, guitars, flute and vocals (no lyrics).

The album begins with “From the Depths.” The piece begins with dark, ominous sounds that suggest (to me, anyway) being in very deep water. Gradually, the tone lifts and bright sparkles of sound give hope that things will be okay. From there on, the piece sails smoothly and gracefully. “Oceanside” beautifully expresses the peaceful contentment that fills the soul by a calm ocean. “The Order of Things” is more pensive, looking inward for answers. “Last One Home” is a quiet and thoughtful piano piece with string accompaniment. More orchestrated than some of the other tracks, “Finding Pixies” is much lighter and more playful with a buoyant sense of adventure. “Seeking Sanctuary” is a favorite with its upbeat rhythm and sense of forward motion. It’s one of those pieces that makes you turn up the volume just because it makes you feel good! “Alone In the Crowd” returns to a more melancholy mood and is hauntingly beautiful. “In the Queen’s Court” is both stately and jaunty with flute, strings and a good-natured attitude. The more ambient “Aftermath” mourns a painful loss. Both graceful and mysterious, “Arendelle Rising” could easily be part of a movie soundtrack. The majestic “To The Heavens” brings the album to a close with feelings of relief and resolution.

I sincerely hope that the creation A Presence of Three Minds brought healing to the composer, as I’m sure it will for those who hear it. It is available from www.MusicByHolland.com, Amazon, Apple Music and CD Baby as well as many streaming sites.
September 4, 2019
This review has been tagged as:
Kathy's Picks
Holland's Website Holland's Artist Page on MainlyPiano
Album Links
Amazon (referral)Apple Music
This site contains affiliate links to products. We may receive a commission for purchases made through these links.
More reviews of Holland Phillips albums 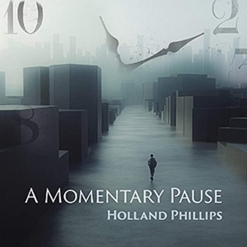 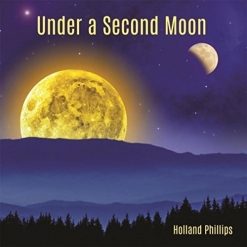