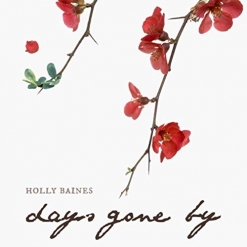 Holly's Artist Page on MainlyPiano
Album Links
Amazon (referral)iTunes
This site contains affiliate links to products. We may receive a commission for purchases made through these links.
Days Gone By
Holly Baines
2019 / Holly Baines
40 minutes
Review by Kathy Parsons
Days Gone By is the very impressive debut album by New Zealand pianist/composer Holly Baines. The daughter of pianist/composer Kris Baines, Holly was just sixteen when the album was released. The eleven piano solos include ten original compositions and one original arrangement. As a long-time piano teacher, I have to say that most pianists in their teens are primarily anxious to show how fast and loud they can play rather than taking listeners on an emotional journey through the heart and mind of an obviously very sensitive (and talented!) young person. Over the course of the past year, six singles from the album were released, leading up to the release of the full album. Calling her music “soundtrackish,” Holly proves to be a vivid musical storyteller. Overall, the music is on the quiet, thoughtful side, but this is no ear-candy as Holly has obviously harnessed her intensity and emotional energy with her music. If she is this clear and concise in her music at this young age, I think the world is in for a very big treat should she continue to compose.

Days Gone By opens with “Bluejay,” a piece that describes a peaceful walk in the woods while enjoying the antics of birds and the freshness of Spring - a lovely beginning! “When You Return” expresses the hope and longing of someone waiting for the return of “the love of their life.” Gently bittersweet and nostalgic, it’s easy to imagine someone staring out of a window, lost in her thoughts. “Train To Berlin” is a touching “tribute to the survivors of the horror of World War 2 concentration camps and a memorial to those who never returned.” Deeply heartfelt and poignant, I can’t imagine a more beautiful tribute. “Chasing Starlight” expresses the playful innocence and joy of childhood dreams. “London Bridge” is a fascinating minor key arrangement of the nursery rhyme/children’s song. I love it when a composer can take a song so ingrained in our heads and do something completely original with it, as Holly has done here. The original melody is there, in a dark minor key, but she has also added some original passages - very well done! Holly calls “Winds of Time” a melodic representation of Time” as she weaves the always-changing theme throughout the piece, sometimes slowly and sometimes at a quicker flow - a favorite. Haunting and melancholy, “The Time We Had” reflects on a musical memory and resolves with the acceptance that that time is gone forever - another favorite. “Regrets” and “Last Moment” are both beautifully heartfelt compositions about difficult moments in life that we all have and the emotional reactions we have to them. I marvel at how someone so young would have such a deep understanding of these feelings. Amazing! The title track explores the passage of time and how those times are recorded in our memories. Expressing a variety of emotions, this one aims for the heart and hits a bullseye every time - my favorite track on the album. Again, amazing! The closing track, “Sanchez,” was inspired by a scene in the movie USS Indianapolis - Men Of Courage where Sanchez plays a piano keyboard fashioned on the side of his life raft as he floats on the ocean, hoping to be rescued. Reflecting both hope and despair, the rolling left hand chords and the rubato tempo effectively simulate the motion of the water and do much to give this very emotional piece its powerful dramatic quality.

Holly Baines has set the bar very high for her future albums and I can’t wait to see and hear what she does next! Days Gone By is available from Amazon, Apple Music/iTunes and CD Baby as well as many streaming sites. Don’t miss it!
November 10, 2019
This review has been tagged as:
Debut AlbumsKathy's Picks
Holly's Artist Page on MainlyPiano
Album Links
Amazon (referral)iTunes
This site contains affiliate links to products. We may receive a commission for purchases made through these links.