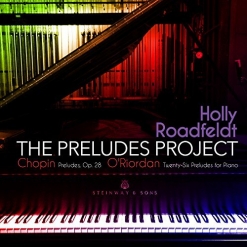 Holly's Website Holly's Artist Page on MainlyPiano
Album Links
Amazon (referral)iTunes
This site contains affiliate links to products. We may receive a commission for purchases made through these links.
The Preludes Project
Holly Roadfeldt
2016 / Ravello Records
93 minutes
Review by Kathy Parsons
The Preludes Project is a two-part collection (two CDs, if that is your format of choice) of Frederic Chopin’s twenty-four piano preludes (Op. 28) and a new set of twenty-six preludes by American composer Kirk O’Riordan. Performed by Holly Roadfeldt, The Preludes Project is her debut album. A versatile pianist who regularly performs a combination of newly-composed music with established masterpieces, Roadfeldt has premiered nearly one hundred solo and chamber works. She has performed as a chamber musician with members of many prominent orchestras as well as with a variety of concert artists. She currently has a private studio in New York City and serves as master piano faculty at The Music School of Delaware. She received performance degrees from the Eastman School of Music (B.M.), Indiana University (M.M.) and the University of Colorado in Boulder (D.M.A.). Roadfeldt commissioned O’Riordan to compose his set of preludes as part of her project celebrating the piano prelude. She has been commissioning contemporary composers to write new preludes to be performed along with classical preludes including those by Chopin, JS Bach, Rachmaninoff, and Debussy.

Chopin’s series of Preludes (Op. 28) was in response to JS Bach’s Well-Tempered Clavier, which features Preludes and Fugues in all twenty-four major and minor keys. These are some of the best-loved piano solos in all of the piano literature and it’s a rare piano student who hasn’t played at least a few of them. Some are quick and invigorating while others are slower, more melodic and deeply melancholy. These gems have withstood the test of time and still sound quite contemporary - especially the faster, more percussive pieces. Roadfeldt gives them a bit of a modern spin while remaining faithful to the originals. The clarity of her playing on the faster and more complicated preludes is jaw-dropping. She is truly an artist in full command of her instrument, but never at the expense of the beauty of the music.

One of the major differences between the preludes of Chopin and those of O’Riordan is that O’Riordan did not work within the restriction of composing one prelude for each key. He chose instead to organize his preludes by “threads,” which he explains as being compositional ideas that are developed over the course of the entire set. This allowed him to develop several ideas concurrently with the plan that they would in some way merge together by the end of the set. His intention was to treat his Preludes in a cyclical fashion rather than an exploration of the nuances and colors of the twenty-four keys. Like the Chopin Preludes, there is a wide variety of moods and playing styles included in set from bright and lively to dark and somber.

The juxtaposition of the Preludes of the 19th century and those of the 21st is a fascinating study, and I look forward to seeing how this project develops. The Preludes Project is available from Amazon and iTunes as well as other online retail music outlets. Recommended!

March 13, 2017
This review has been tagged as:
Debut AlbumsModern Classical
Holly's Website Holly's Artist Page on MainlyPiano
Album Links
Amazon (referral)iTunes
This site contains affiliate links to products. We may receive a commission for purchases made through these links.