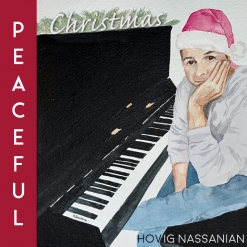 Hovig's Website Hovig's Artist Page on MainlyPiano
Album Links
SmartlinksAmazon (referral)Spotify
This site contains affiliate links to products. We may receive a commission for purchases made through these links.
Peaceful Christmas
Hovig Nassanian
2021 / Necessary Kuriosity
32 minutes
Review by Kathy Parsons
Hovig Nassanian's Peaceful Christmas is a delightful collection of eleven solo piano Christmas carols from several countries as well a couple of original songs. Hovig is an Armenian pianist/composer who was born in Lebanon and has been living and teaching in Cyprus for most of his adult life. This is the second album in his Peaceful series, which began with Peaceful Piano in early 2021 and is doing well internationally. Hovig started playing the piano at the age of 4 and composed his first piece in his early teens. He has written four musicals in collaboration with colleagues and has produced more than a dozen others. He has also released several singles and music videos with collaborating artists during 2021.

Peaceful Christmas begins with the French carol, "Il est né, le divin Enfant," which was often played during the Christmas season on the loudspeakers on the street where Hovig lived in Beirut as a young boy. The song has always given Hovig a "cheerful" feeling, and his arrangement all but created itself once he sat down at the piano to work on it. Lively and joyful, it's a very festive start to the album! Hovig's arrangement of "What Child Is This?" dates back to his university days when he played it for a Christmas concert. One of the most beautiful melodies ever written ("Greensleeves"), Hovig lets it sing without much embellishment for the first half of the track, adding a more personal interpretation in the second half - I love this arrangement! "Bereden Väg För Herran" is a traditional Swedish carol that I was not familiar with. Gentle and soulful, it's a beauty! "Kishern Itchav" is a haunting Armenian carol that Hovig sang in school in Lebanon. The title translates to "The Night Descended" and the lyrics tell about the night Jesus was born. I wasn't familiar with this song either, and I love it! "Tzenav" is one of Hovig's original pieces and was composed for choir in 1988 in Beirut. The Armenian title means "Born" and Hovig mentions that although he remembers rehearsing it with the singers, "I have no recollection of the performance itself. It may well have been that we couldn’t perform it due to the intense civil war in those days." Tender and heartfelt, it's another beautiful piece that deserves to be more widely heard and appreciated. "Kypriaka Kalanta" is a traditional Cypriot carol that Hovig wanted to "give a taste of our island," adding some "twists and color" to the lovely melody. "The Time Is Right" is the theme song for an original Christmas musical Hovig wrote in 1994. The sweet, heartfelt melody expresses childlike innocence and hope. Hovig's arrangement of "O Holy Night" has a wistful, dreamy quality that is soothing and peaceful. His arrangement of "Deck the Halls" has an interesting story. Hovig was teaching the song to his Junior Choir and felt that the kids were not particularly enjoying it, so he decided to make it more fun, improvising some funky passages on the piano and guiding the choir to sing the "Fa la la's" with them. "They got excited, came up with their own choreography and it turned out to be a very memorable number when we performed it a couple of weeks later." This is a really happy arrangement sure to bring a smile!

With all of the Christmas music I review and used to teach, it's great to find some songs and carols I've never heard before. Whether it's his original compositions or his arrangements of more traditional Christmas carols, Hovig Nassanian's Peaceful Christmas has something for everyone! It is available from Amazon, and streaming sites like Spotify. It should be available on Apple Music/iTunes soon!

November 29, 2021
This review has been tagged as:
Holiday AlbumsHoliday Albums: 2021 (and singles)
Hovig's Website Hovig's Artist Page on MainlyPiano
Album Links
SmartlinksAmazon (referral)Spotify
This site contains affiliate links to products. We may receive a commission for purchases made through these links.