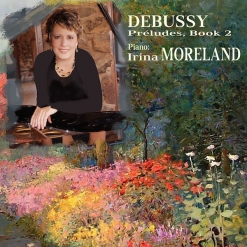 Irina's Website Irina's Artist Page on MainlyPiano
Album Links
Amazon (referral)SpotifyYouTube
This site contains affiliate links to products. We may receive a commission for purchases made through these links.
Debussy: Preludes, Book 2
Irina Moreland
2022 / Irina Moreland
37 minutes
Review by Kathy Parsons
Irina Moreland's performance of Claude Debussy's Preludes, Book 2 is beyond impressive! I had the opportunity to follow the sheet music while listening to the album and was just amazed at Dr. Moreland's virtuosity. The solo piano recording was mastered by my good friend, Louis Colaiannia (an internationally-recognized pianist/composer from Colorado), and I'm so glad he suggested that I write a review! The twelve preludes in this collection are varied in mood and expression, and unlike the preludes of Chopin and Bach (and other composers), Debussy's do not follow a strict pattern of key signature changes. Composed between 1912 and 1913, the preludes in Book 2 are similar in mood to those in Book 1, but those in Book 2 are more harmonically complex and place a greater emphasis on technique. As he did in Book 1, Debussy placed the title of each piece at the end so as not to influence the performer.

Irina Moreland was born in Central Asia and attended the St. Petersburg Specialized College of Music for Gifted Children. She earned her Master of Musical Arts with Honorary Diploma and her Doctor of Musical Arts from St. Petersburg State Conservatory and did post-graduate studies at Moscow State University. She received a second Doctor of Musical Arts in 2002 from the College of Music at University of Colorado in Boulder. Dr. Moreland has held the positions of Assistant Professor for the Keyboard Faculty at St. Petersburg State Conservatory; Adjunct Professor for the Colorado School of Mines Choral Department; and, Graduate Assistant and Accompanist at University of Colorado, Boulder. Since 2005, she has taught as an Affiliate Faculty at Colorado Christian University and, since 2007, as an Instructor for the University of Colorado Denver teaching Music Appreciation, Music History and group piano classes. She has performed in concert all over the world.

The first prelude is titled "Brouillards (Mists)." One of the fascinating things about this piece is that the left hand plays the white keys while the right hand plays the black keys, perhaps to symbolically mix to become the gray tones of the mists. The time signature changes several times within the piece, effectively depicting the ever-changing rhythms of the mist.

#4, "Les fées sont d'exquises danseuses (Fairies Are Exquisite Dancers)," is bright and very lively, depicting the rapid fluttering of fairy wings, slowing to a graceful dance among the flowers, and then darting from place to place - very visual and fanciful!

#6, "General Lavine," is a tribute to an American juggler by that name who was known to play the piano with his toes! Playful and upbeat, it's is a great example of Debussy's foray into ragtime piano.

#8, "Ondine," refers to mythical nymphs that were believed to sing and dance on the water's surface to lure fishermen away from their work. Bright, sparkling and hypnotic, this is a very visual piece that tells a story that begins calmly and becomes very dramatic in the last minute or so - and probably doesn't end well for the fishermen!

#12, "Feux d'artifice (Fireworks)," is stunning in so many ways. To give you an idea of the speed, it is fourteen pages of mostly dense, rapid passages, and Dr. Moreland plays it in just over four minutes. What a dramatic and exciting way to end the set of preludes and the album! I can easily imagine seeing Dr. Moreland playing this in concert and and the entire audience jumping to its feet with a wildly enthusiastic standing ovation! Brava!!!

Debussy: Preludes, Book 2 is available from Amazon and can be streamed on several sites including Spotify and YouTube. You will be amazed and dazzled by Irina Moreland's performance!
August 4, 2022
This review has been tagged as:
Classical
Irina's Website Irina's Artist Page on MainlyPiano
Album Links
Amazon (referral)SpotifyYouTube
This site contains affiliate links to products. We may receive a commission for purchases made through these links.
More reviews of Irina Moreland albums 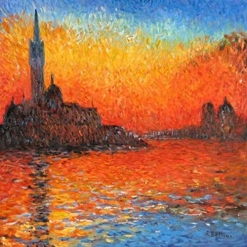