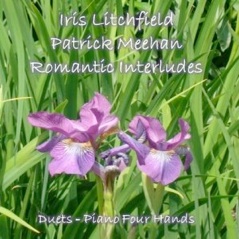 Iris' Website Iris' Artist Page on MainlyPiano Patrick's Website Patrick's Artist Page on MainlyPiano
Album Links
Amazon (referral)
This site contains affiliate links to products. We may receive a commission for purchases made through these links.
Romantic Interludes
Iris Litchfield and Patrick Meehan
2012 / Salvatori Productions
54 minutes
Review by Kathy Parsons
Romantic Interludes is a collection of nineteen classical piano duets performed by British pianists Iris Litchfield and Patrick Meehan. Litchfield has released several CDs of original compositions over the past decade or so, both solo and with guitarist Tom Salvatori. Her lovely, heartfelt music has touched many a heart all over the world. She started her piano studies at the age of five, but her life’s career was in teaching mathematics. When she retired, she found more time to devote to her music, resulting in a steady stream of charming and optimistic piano music. On this latest release, Litchfield teamed with her own piano teacher, mentor and friend, Patrick Meehan, performing an impressive selection of four-hand piano music from Edward Elgar, Leon D’Ourville, Ralph Vaughan Williams, Moritz Moszkowski, Gabriel Faure, and Robert Schumann, most of whom would be considered Romantic composers of the late-19th and early-20th centuries. None of this music is particularly flashy or difficult to comprehend, making it accessible to all listeners with an appreciation for classical piano music. The pianists are a great match, as the music is seamless and it isn’t obvious to the ear that these are duets.

The first of the Romantic Interludes is Elgar’s lovely “Salut D’Amour,” a sweet love song without words. I had never heard of Leon D’Ourville and very little information about him is available online, but the four selections from his Soirees Musicales are positively delightful in their brevity and lighthearted expression. The two pieces by Ralph Vaughan Williams are quite different from each other. First is “Prelude Rhosymedre,” a graceful composition with a strong Baroque influence. The second is his “Fantasia on Greensleeves,” a fascinating and thoroughly enjoyable theme and variations on this ancient and very familiar folk song. The five “Spanish Dances” by Moritz Moszkowski are bright and effervescent (I love #2!), and I’m sure it’s quite a triumph when both pianists end at the same time! Faure’s “Sicillienne de Pelleas et Melisande” is a stunning beauty - elegant and more than a little melancholy. Robert Schumann’s “Six Etudes en Forme de Canon” are quite a tour de force and demonstrate Schumann’s versatility as a composer as well as the versatility of these two excellent pianists. I’m thinking I’m going to have to pull out some of my four-hand music and try some of these!

Romantic Interludes is sure to please classical music lovers and fans of four-hand piano repertoire. It is available from Amazon.com. Recommended!
August 21, 2012
Iris' Website Iris' Artist Page on MainlyPiano Patrick's Website Patrick's Artist Page on MainlyPiano
Album Links
Amazon (referral)
This site contains affiliate links to products. We may receive a commission for purchases made through these links.
More reviews of Iris Litchfield albums 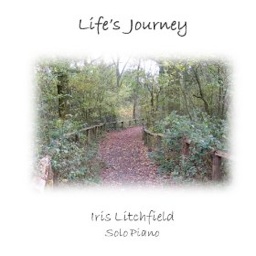 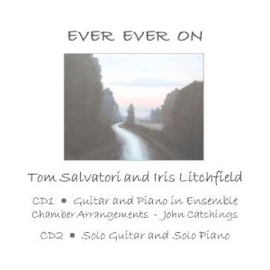 Ever Ever On
with Tom Salvatori
2010 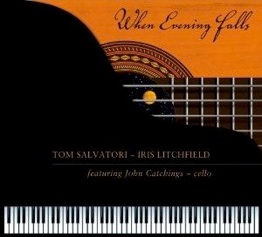 When Evening Falls
with Tom Salvatori
2007