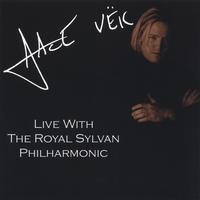 Jace's Website Jace's Artist Page on MainlyPiano
Album Links
Amazon (referral)iTunes
This site contains affiliate links to products. We may receive a commission for purchases made through these links.
Live with the Royal Sylvan Philharmonic
Jace Vek
2003 / Jace Vek
Review by Kathy Parsons
Jace Vek’s second release is a stunning collection of fully orchestrated original compositions with himself playing the piano in concert with the Royal Sylvan Philharmonic Orchestra. Four of the eight tracks are orchestrated versions of piano solos from Vek’s debut release, Vision, which was one of my “Top 10” favorites for 2001. As good as Vision was and is, Live shows a remarkable amount of artistic growth and maturity. The orchestrations are full and passionate, and bring out Vek’s virtuosity on the piano rather than drowning him out. This is one of the rare CDs that I can listen to over and over and still think, “Wow!” At 30, I’m sure Jace Vek is on his way to a bright and illustrious career!

The CD opens with “The Last Sunrise,” a lovely, almost ambient composition with shifting time signatures and a piano line that seems to float above the fluid strings. The piece builds in grandeur as more of the orchestra comes in, bringing it to a climax, and then it drifts off as gently as it began. “Sarabande Rhapsody” is pure joy. Based on Handel’s “Sarabande,” one of my favorite classical teaching pieces, these variations are true to the original work, but update it at the same time. I’m sure Handel is smiling from his heaven! A very “big” arrangement, it is obvious that the orchestra members are having a lot of fun with the give and take between themselves and Vek at the piano. Bravo! “Circa 1990” begins with a swirling piano solo that repeats itself a few times within the piece while the orchestra (mostly oboe and strings) weaves a beautiful counterpoint. “Gate C-61 and Romance” was on Vision as two separate tracks that melted into each other. Both powerful and soothing, the richness of this piece is a thrill. “Lorilei” is a gorgeous composition with cinematic qualities. The passion and interplay between the piano and orchestra clearly show why synthesizer will never replace the real instruments or the musicians behind them. “Mari’s Eyes” was also originally on Vision, and has reached a much fuller realization with the orchestra. It is a gorgeous piano solo, but the orchestra displays Vek’s full vision of the piece, helping it to swoop and glide. “Jennifer’s Largo” is lighter and dreamier, with a wistful sort of melancholy. “Thadet Variations” is perhaps Vek’s most ambitious work to date. It also appeared on Vision as three separate tracks. Inspired by lying in the grass one evening and looking up at the sky, “thadet” is a Finnish word meaning “sky full of stars.” Coming from a profound musical moment in Vek’s life, the piece is about being immersed in and open to the vastness of the celestial universe. A musical marvel, the piece clearly demonstrates Vek’s range as a pianist and composer, going from a light and tinkling sparkle in the upper registers of the piano to thunderous octave runs, from a soft gentleness to full-on bravado and everything in between.

Jace Vek has outdone himself with this new release! It is contemporary piano with full symphonic treatment at its best. It will be available from jacevekmusic.com and amazon.com. Very highly recommended!
March 3, 2003
This review has been tagged as:
Kathy's Favorites: 2005Kathy's Top 40 for the Decade (2000-2009)
Jace's Website Jace's Artist Page on MainlyPiano
Album Links
Amazon (referral)iTunes
This site contains affiliate links to products. We may receive a commission for purchases made through these links.
More reviews of Jace Vek albums 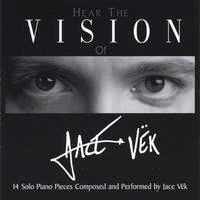