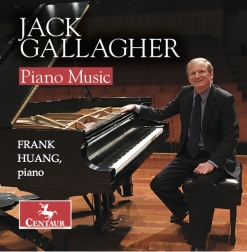 Jack's Website Jack's Artist Page on MainlyPiano Frank's Website Frank's Artist Page on MainlyPiano
Album Links
Amazon (referral)iTunes
This site contains affiliate links to products. We may receive a commission for purchases made through these links.
Piano Music of Jack Gallagher
Jack Gallagher and Frank Huang
2016 / Centaur Records
78 minutes
Review by Kathy Parsons
Piano Music of Jack Gallagher is a fascinating retrospective of solo piano music composed and revised between 1971 and 2014. Jack Gallagher is the Professor of Music at College of Wooster in Ohio and is an award-winning composer whose music has been performed by soloists and symphony orchestras all over the world; it also receives international airplay on classical radio stations. Although the piano is not Gallagher’s primary instrument, it has been a close companion throughout his career, beginning with his first musical studies on the accordion as a child. The music on this album was performed on a Steinway D grand piano by Frank Huang, Assistant Professor of Piano at Miami University in Oxford, Ohio. There are nine pieces on the album, but since most are multi-movement works, there is a total of twenty-two tracks. Four of the pieces were composed for or dedicated to Gallagher’s wife, a longtime piano teacher. Several of the shorter pieces were written for his daughter, making this a very personal album. Since this is music that was composed over a long period of time, the styles vary, with some pieces quite lyrical and melodic and some more experimental and edgy. The liner notes for the CD include Gallagher’s comments about the individual pieces, giving personal insight into the history of each work.

There is far too much music on this album to mention every track, so I’ll cover some of my own favorites. Piano Music of Jack Gallagher begins with Sonata for Piano, a three-movement sonata that was composed for Gallagher’s wife’s birthday in 1973 and revised in 2005 and 2008. The first and third movements are “bigger” and more energetic while second is much more lyrical and calming. “Evening Music” was completed in 1998 and revised ten years later. It occasionally hints at Chopin and John Field’s nocturnes, but most of the rhythms and harmonies are much more contemporary. Huang’s versatile touch is warm and velvety in some passages and bright and percussive in others. The second movement of Sonatina For Piano began as a lullaby composed for friends. It is also the second of the Six Bagatelles (not repeated on this album) and was orchestrated and retitled “Berceuse.” Gentle, delicate, and very peaceful, it’s a beauty! “Nocturne” was my introduction to Gallagher’s music when I reviewed Sonance, performed by Jeri-Mae Astolfi, in 2007. This revised version is somewhat longer, but is rapturous in its graceful phrasing and flowing melody lines - my favorite piece on the album. The Six Bagatelles are much shorter and dedicated to various friends and colleagues. Varied in styling and mood, the group of pieces was completed in 1979 and had its first full performance in 1980. My favorite of the six (other than “Berceuse”) is the dreamy “Arietta,” although I also really like the livelier and more playful “Rondino.” “Six Pieces for Kelly” was completed in 1989 and dedicated to Gallagher’s daughter when she was eight years old. These are fairly short, uncomplicated pieces designed for young performers, and all six are charming! “Malambo Nouveau” is the most recent composition on the album (2000, revised in 2009). Originally commissioned as a short encore piece, it was expanded into a very technically demanding work that I would guess would leave the pianist as well as the audience breathless! The last piece on the album, “Happy Birthday, April,” was composed as a gift for Gallagher’s wife in 1976 and revised for this album in 2014. Possibly the most melodic piece on the album, the melody is strong enough to support lyrics, although none are needed - the notes say it all!

For listeners looking for music for massage or quiet meditation, this album probably won’t do it for you. For a somewhat more challenging but very rewarding listening experience, give Piano Music of Jack Gallagher a try! It is available from Amazon and iTunes. Recommended!
March 25, 2017
This review has been tagged as:
Modern Classical
Jack's Website Jack's Artist Page on MainlyPiano Frank's Website Frank's Artist Page on MainlyPiano
Album Links
Amazon (referral)iTunes
This site contains affiliate links to products. We may receive a commission for purchases made through these links.