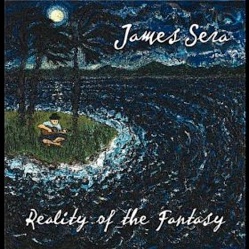 James' Website James' Artist Page on MainlyPiano
Album Links
Amazon (referral)iTunes
This site contains affiliate links to products. We may receive a commission for purchases made through these links.
Reality of the Fantasy
James Sera
2011 / James Sera
54 minutes
Review by Kathy Parsons
Reality of the Fantasy is the debut solo acoustic guitar album by James Sera, a New York-based graduate of the Guitar Institute of Technology. A devoted and passionate guitarist from a very young age, Sera’s maturing style of finger-picking is lush and intimate - sometimes folkish, sometimes more ambient or new age, always uniquely his own. The music for Reality of the Fantasy was crafted in collaboration with Grammy-award winning producer/engineer Corin Nelson at Will Ackerman’s Imaginary Road Studios in Vermont after in-depth consultations with Ackerman himself. Drawing his inspiration from his own experiences as well as inner reflection, Sera’s music is deeply personal, conveying emotions such as melancholy and anger as well the frustrations of everyday life. Reality of the Fantasy is also a quest to find harmony in a world of dissonance and discord, giving the music a calming, hypnotic quality. All nine tracks are 5-7 minutes long, giving each piece time to develop and the listener time to get lost in the magic of the music.

Reality of the Fantasy begins with “Wish,” a silky-smooth piece that feels like a warm, peaceful daydream. Although there are no guitar pyrotechnics, it is obvious that Sera is a master of his instrument as he plays several voices at once, sounding more like an guitar duo or trio than just one artist. Okay, I’m hooked! “The Ascension” slows the tempo and goes a bit darker and more intense. Very introspective and almost mournful at times, this piece is a beauty (and a favorite!). “Day of Celebration” lifts the mood considerably, evoking images of rural Americana and perhaps a guitarist sitting on the porch, expressing his innermost thoughts with his guitar. “A Moment in Time” is another favorite. Again rather moody and reflective, the strong melody and wonderful guitar playing go right to the heart. I also really like “Chemistry in Motion,” which has a lightness to the touch and an easy-going tempo, but is actually rather dark and moody. It was apparently inspired by Sera’s love of horror movie music! In the CD liner notes, the title track reiterates the adage, “Hope for the best....prepare for the worst,” so it’s no surprise that this piece expresses a variety of moods and emotions with a certain amount of drama. “Someway, Somehow” is a song of hope. Uplifting and optimistic while remaining grounded, it’s a beautiful closing to an exceptional debut!

If you like solo acoustic guitar music that tells a story and comes from the heart, but sure to check this one out! Reality of the Fantasy is available from Amazon, iTunes, and CD Baby. Recommended!
August 16, 2013
This review has been tagged as:
Debut AlbumsGuitar music
James' Website James' Artist Page on MainlyPiano
Album Links
Amazon (referral)iTunes
This site contains affiliate links to products. We may receive a commission for purchases made through these links.