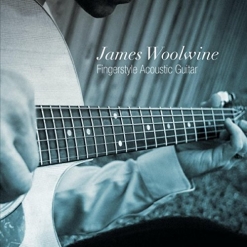 James' Website James' Artist Page on MainlyPiano
Album Links
Amazon (referral)iTunes
This site contains affiliate links to products. We may receive a commission for purchases made through these links.
Fingerstyle Acoustic Guitar
James Woolwine
2018 / James Woolwine
45 minutes
Review by Kathy Parsons
Fingerstyle Acoustic Guitar is James Woolwine’s follow-up to his 2015 debut album, Solo Piano Destruction. Wait a minute! The first album was solo piano and the second is acoustic guitar? Yep! Woolwine is also a singer-songwriter, so don’t expect this artist to get into a repetitive rut any time soon! Of the ten tracks on the album, nine are solo acoustic guitar and one is vocal and guitar; seven of the ten are original compositions and three are original arrangements of covers. Although the music is quite varied, most of it has a gentle, peaceful vibe.

Fingerstyle Acoustic Guitar begins with a short introductory piece that sets the tone of the music that follows. “Crossfit Envy” was given the title as a joke. It was composed as Woolwine watched The Crossfit World Championships on television and incorporates a riff he originally composed for piano. It’s a beautiful piece with a flowing melody and intricate finger work. “Ashley’s Star” was composed by one of Woolwine’s college teachers, Jon Finn. Played at a relaxed, easy tempo, it moves along with grace and tenderness. One of the challenges of being a music teacher is waiting for students to arrive for their lessons. Woolwine composed “Waiting” over a period of days while doing just that, enjoying the process. The piece very effectively combines several melodic themes over a classical guitar-style rhythm - a favorite. “Pure Imagination” is Woolwine’s solo guitar arrangement of the song from the 1971 movie, Willie Wonka and the Chocolate Factory. Dreamy and more than a little wistful, it’s a beautiful arrangement. “Changing Course” was given that title because it changes course several times within the piece. Some of the themes are in a more classical style, and some have a moderate rock or even a folk feeling, successfully combining several of the many influences on Woolwine’s music. The closing track is a cover of Metallica’s “Sad But True.” Woolwine arranged the song for a course on music licensing. Encouraged to be creative and dramatic in his interpretation, Woolwine thought it would be interesting to take a heavy song and turn it into an acoustic ballad. It is interesting and a great ending for the album.

Fingerstyle Acoustic Guitar has something for everyone, so if you enjoy solo acoustic guitar that’s a little different, be sure to check this one out! It is available from www.JamesWoolwine.com, Amazon, iTunes and CD Baby.
June 19, 2018
This review has been tagged as:
Guitar music
James' Website James' Artist Page on MainlyPiano
Album Links
Amazon (referral)iTunes
This site contains affiliate links to products. We may receive a commission for purchases made through these links.
More reviews of James Woolwine albums 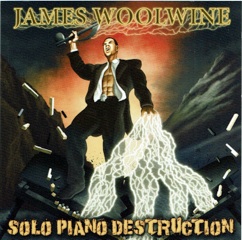