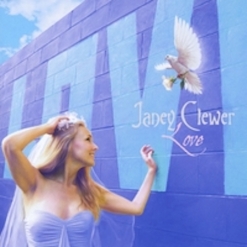 Janey's Website Janey's Artist Page on MainlyPiano
Album Links
Amazon (referral)iTunes
This site contains affiliate links to products. We may receive a commission for purchases made through these links.
Love
Janey Clewer
2012 / Vivid Sounds Corporation
59 minutes
Review by Michael Debbage
This reviewer’s first introduction to pianist Janey Clewer was her One On One collaboration with the sensational session guitar player Bruce Gaitsch who had been creating his own solo work. It is here we find out that the sweet music they created together was their own personal life as husband and wife extending out to their art. With Clewer now on this reviewer’s musical radar, her 2012 compilation Love is a great introduction to her own musical brand with 10 tracks that attempt to highlight four of her earlier solo efforts which also introduces four brand new tracks.

One look at the track listing and you immediately realize that Clewer has many musical friend’s that include but are not limited to Peter Cetera, Marc Jordan, Bill Champlin, Richard Marx, Jay Graydon, Eric Carmen and of course her husband Bruce Gaitsch. So, at first glance one would conclude that this is about who Clewer knows, however, this quick rush to judgment would be so wrong. Upon deeper examination the majority of the recording, engineering, production and writing is largely all about Clewer. Add her songwriting and piano capabilities along with that songbird of a voice that brings to mind a cross between the purity of Barbara Streisand and the bossa nova feel of Basia, then that will give you an idea of Janey’s vocal capabilities.

First let us focus on the four new tracks one of which is the title track that opens up the album. The inaugural track includes Cetera’s distinguishable vocals merging seamlessly with Clewer’s which is an excellent start as they also weave with the harmonies of several others including the notable Bill Champlin. The other new tracks are more stripped down with the most notable being Clewer’s strong lavish vocal and piano performance on “The Last Word You Said”.

Otherwise this compilation album pulls four tracks from Clewer’s 1995 release Janey, three tracks from the 1996 release Call Me Romantic, one track from the 1997 When Stars Collide and two from the 2004 Perfume album. Not sure why the limited representation of When Stars Collide though it is described as Clewer’s most eclectic collection. Perhaps Clewer was simply focusing on the strongest songs to make Love even more lovable. As such one has to mention “Lovers Are Never Lost” that features the uplifting melody of Janey’s composition and voice alongside the guitar work of her husband Bruce Gaitsch. In addition, Clewer’s no edge vocals are a perfect complement alongside the more rugged vocals of Eric Carmen on the other new more upbeat track “Only Time Will Tell”. This track also features Rev Dave Boruff on saxophone, famous for his appearances on David Foster’s solo material. It is this type of high-quality composition that would sit lovely on a new Basia album.

This is not Clewer’s first attempt at bringing us up to date on her earlier solo material. This was first done back in 1998 on her Kiss By Kiss album that covered her first three solo efforts. Second time around Love bring us apprentices up to date by covering her first four album only to further entice her faithful with 4 brand new tracks. Though only released in Japan this album is currently available on CD Baby for $18.99 and it is worth every cent of your music budget.

June 23, 2019
This review has been tagged as:
Michael's Picks
Janey's Website Janey's Artist Page on MainlyPiano
Album Links
Amazon (referral)iTunes
This site contains affiliate links to products. We may receive a commission for purchases made through these links.