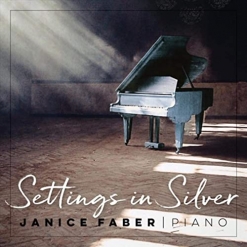 Janice's Website Janice's Artist Page on MainlyPiano
Album Links
Amazon (referral)iTunesSpotify
This site contains affiliate links to products. We may receive a commission for purchases made through these links.
Settings In Silver
Janice Faber
2019 / Janice Faber
61 minutes
Review by Kathy Parsons
Settings In Silver, the eighth full-length album by pianist/composer/arranger Janice Faber, is a peaceful and soothing collection of thirteen tracks that include original compositions (4) and her arrangements of hymns and classical music. In this difficult time, the music tells of hope and grace as well as offering a one-hour retreat from the troubles of the world. Since these pieces are all solo piano, the beauty and emotional depth of the music sing through without the use of any lyrics.

Janice Faber is an artist who did an intensive eight-year study of classical music, earned a college degree in music, and has spent the past three decades performing regularly as a soloist, accompanying choral groups, playing with small ensembles and as part of an orchestra. She brings a wealth of experience to her music and plays with the ease of someone who feels the most at home with a piano under her fingertips. Her 2016 album of all-original piano solos, Peace & Quiet, was nominated for Album of the Year by Whisperings Solo Piano Radio.

Settings In Silver begins with “This Side of Heaven,” one of the original compositions. The easy flow and gentle rubato express a quiet kind of joy that soothes the soul and rekindles the spirit. “Agnus Dei” is Faber’s arrangement of a Michael W. Smith song that was originally released in 1990. Graceful and heartfelt, it’s a beautiful arrangement. There are many pieces of music titled “Ave Maria,” but the one composed by Franz Schubert has always been my favorite. Faber’s arrangement updates the piece while staying faithful to the original melody - love it! “Mercy’s River,” the second Faber original, is one of my favorite pieces on the album. I love the intensity and passion that flow through the piece and hope sheet music becomes available for this one! “Joyful, Joyful We Adore Thee” is based on Beethoven’s “Ode to Joy” and is still one of the most popular hymns today. Faber’s arrangement is contemporary with some beautiful added passages, yet it remains faithful to the original. “Pie Jesu” is from Andrew Lloyd Webber’s Requiem, which was composed in honor of his father and premiered in 1985. Faber gives her special kind of grace to the piece, which overflows with love. David Foster’s “The Prayer” has been extremely popular and won several major awards. Faber’s arrangement focuses on the beauty of the melody as well as the emotional power of the song itself - another favorite. I also really like Faber’s medley of JS Bach’s “Sheep May Safely Graze,” her own “Still Water” and Bach’s “Jesu Joy of Man’s Desiring,” a combination that flows seamlessly. “Sergei’s Vocalise” is a solo piano arrangement of Rachmaninoff’s “Vocalise,” a piece often referred to as one of the most beautiful ever written; Faber makes it clear why the piece has earned that reputation while making it her own. Faber closes the album with her own “Song of Grace,” which weaves passages of “Amazing Grace” into her own composition.

Settings In Silver is another excellent solo piano album from Janice Faber and is available from www.JaniceFaberPiano.com, Amazon, iTunes and Spotify.
June 13, 2020
This review has been tagged as:
Hymn ArrangementsKathy's Picks
Janice's Website Janice's Artist Page on MainlyPiano
Album Links
Amazon (referral)iTunesSpotify
This site contains affiliate links to products. We may receive a commission for purchases made through these links.
More reviews of Janice Faber albums 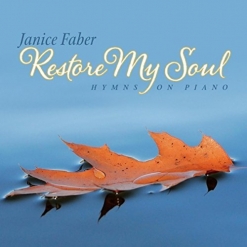 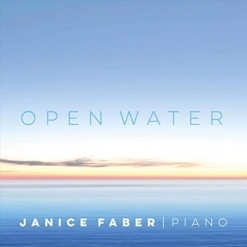 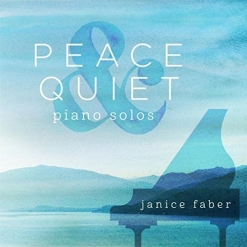