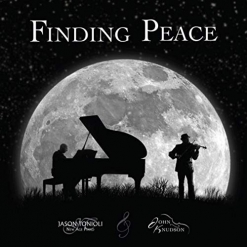 Jason's Website Jason's Artist Page on MainlyPiano John's Website John's Artist Page on MainlyPiano
Album Links
Amazon (referral)iTunes
This site contains affiliate links to products. We may receive a commission for purchases made through these links.
Finding Peace
Jason Tonioli and John Knudson
2018 / Aingeal Music Worldwide, LLC
51 minutes
Review by Kathy Parsons
Finding Peace is the ninth album from Utah pianist/composer Jason Tonioli. Ten of the twelve tracks were composed or arranged as duets for piano and violin and are performed by Tonioli and violinist John Knudson. Tonioli explained his approach: “I tried to have the piano featured equally with the violin as if the two instruments were dance partners.” In the process, he has created a beautiful balance and a style that is almost conversational. Tonioli continues: “Many of the songs included on Finding Peace come from my own search for Peace over the past year. Music has a way of helping to heal those who hear it and those who write the music. Many times I would have a song pop into my mind and… it was as if the music was a soundtrack for my own life experiences.”

Jason Tonioli started piano lessons when he was 5 and hated practicing most of the time he took lessons. His mother and teacher kept him going with the promise that when he composed his own music, he could play it any way he wanted. In addition to his own recordings, Tonioli has written music for a television documentary and many online video productions.

John Knudson has been a professional musician since he was a child and has performed at an impressive number of venues that include The White House, Kennedy Center and 911 Memorial. He has shared the stage with luminaries such as Aretha Franklin, Billy Joel, and Alabama as well as accompanying Mikhail Baryshnikov. He is a Professor of Violin and Viola Instruction at Utah State University as well as a luthier, making and repairing string instruments as “Johny K, the String Doc.”

Finding Peace begins with “Prayer for Peace,” a sincere and heartfelt plea that sets the tranquil tone of the album. “Hope” was actually composed the morning of the recording session. After a few takes, the recording engineer suggested transposing the piece to a more “violin-friendly” key, and the piece then took flight. Although the tone is almost tragic, that glimmer of hope keeps it from despair. The tender “Lullaby for Linzie” is so comforting I almost want to curl up and take a nap! “Remembering” is wistful and nostalgic, looking back on a very happy memory. My favorite piece on the album is “Prayer for the Children.” A second violin represents those who help parents and teachers guide children to become the best they can be. “Sleepsong” and “Dreams” could easily serve as warm and soothing lullabies for kids of any age. “Thinking of You” is another favorite. Tonioli composed the original version back in high school, but was never completely satisfied with it. He and Knudson did some re-working for this album, and the results are gorgeous! “Guide Me to Thee” is a fully-orchestrated arrangement of a traditional hymn. “Forgiveness” and the title track are also favorites. Both are deeply emotional and really touch the heart. The closing track is an arrangement of Brahms’ Lullaby that features the vocals of CaraNua, an Irish/Celtic singing group. The instrumentation is very spare, allowing the angelic voice of Lynn Hilary to wrap the listener in velvety warmth.

Finding Peace provides a wonderful musical escape from the craziness of life! I can’t wait to hear more from Jason Tonioli and John Knudson! The album is available from Amazon, iTunes, as well as various streaming sites.
February 2, 2019
This review has been tagged as:
Kathy's Picks
Jason's Website Jason's Artist Page on MainlyPiano John's Website John's Artist Page on MainlyPiano
Album Links
Amazon (referral)iTunes
This site contains affiliate links to products. We may receive a commission for purchases made through these links.