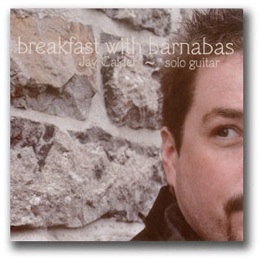 Jay's Website Jay's Artist Page on MainlyPiano
Album Links
Amazon
This site contains affiliate links to products. We may receive a commission for purchases made through these links.
Breakfast With Barnabas
Jay Calder
2003 / Signpost Music
40 minutes
Review by Michael Debbage
Canada has provided the music world with a lot of instrumental music talent with some of the obvious choices being David Foster, Jesse Cook and Johannes Linstead just to name a few. What about Jay Calder? Unfortunately, the vast majority of you may respond with a resounding “Who?” versus “Yes”. Perhaps this review can begin to rectify that oversight, as Jay Calder carries the unique ability of being technically proficient with his finger style guitar but not at the expense of a warm melody making his music equally as accessible.

Calder’s musical background began in the church and clearly his faith is important to him as reflected in the album title Breakfast With Barnabas. A less prominent character from the Scriptures, Calder plays a loose tribute to the “sons of encouragement” that have played an important role in his life. Released over 7 years ago his debut solo album started with a bang, as the album was nominated at the Canadian Vibe Award for instrumental album of the year. The Toronto Independent Music Awards also recognized him as the Best Acoustic Artist but apparently this recognition has not poured south of the Canadian border.

Though the album runs less than 40 minutes it is chockablock full of musical adventures. In fact there is a total of 13 tracks which, for the most part, are self composed with the exception of 3 tracks. They include two Christmas carols in the form of “The Little Drummer Boy” and the short almost interlude format of “Joy To The World”. Both of his interpretations are upbeat especially the former where you are able to witness Jay’s finger style at full throttle. Clocking in at about five minutes it is the longest track on the album and probably one of the most unique interpretations of the Christmas carol. In complete contrast there is the more reflective interpretation of the hymn “O Sacred Head”.

However, this is not about a talented guitarist presenting his twist on well known songs. The remainder of the album’s songs are self composed and show an artist that is not only a fully fledged technician but a guitarist capable of inviting you into his music world. In the fact the album opens with the optimism of “A Full Heart” followed by the reflective title track both penned by Calder himself. Meanwhile, Calder spreads his technical wings on the aforementioned carol “The Little Drummer Boy” as well as his self composition “Endo Contendo” where he also uses the guitar structure to provide us with some handy percussion embellishments. But if you want to really find out just how fast this artist can play check out the finger pickin’ good “Objects In Mirror” which at times brings the visual image of an angry wasp dive bombing over your head because you have invaded his territory. The remaining balance of the album is composed of well structured songs and melodies that are bathed in a warm blaze of technique and melodies.

It has been a long seven years since Calder released his impressive debut. While his activity in the recording studio maybe wanting, his itinerary page on his website shows a very active musician. Perhaps with a little encouragement, maybe Jay could make arrangements and follow up this startling debut and perhaps have “Lunch With Paul”.
March 15, 2010
This review has been tagged as:
Debut AlbumsGuitar music
Jay's Website Jay's Artist Page on MainlyPiano
Album Links
Amazon
This site contains affiliate links to products. We may receive a commission for purchases made through these links.