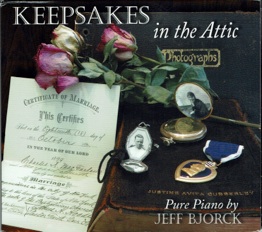 Jeff's Website Jeff's Artist Page on MainlyPiano
Album Links
Amazon (referral)iTunes
This site contains affiliate links to products. We may receive a commission for purchases made through these links.
Keepsakes in the Attic
Jeff Bjorck
2016 / Pure Piano Music
54 minutes
Review by Kathy Parsons
Keepsakes in the Attic is the sixth solo piano album from composer/ pianist/ arranger/clinical psychologist/ professor / researcher/ hang glider/ 21st century Renaissance Man (whew!) Jeff Bjorck. This is the first album that Bjorck has released that doesn’t begin and end with favorite hymns, but Bjorck’s love of hymns often carries over and influences his original music, as it does with several of the thirteen tracks on this album. Twelve of the pieces are original compositions and one is Bjorck’s arrangement of an old Swedish hymn, “Tryggare Kan Ingen Vara (Children of the Heavenly Father)” that reminds him of his early years. Bjorck’s concept for the album was the idea of spending an afternoon in the attic of an old house, “rummaging through various keepsakes belonging to you or your loved ones” and the emotions that those discoveries and memories evoke. This idea is also the perfect framework for Bjorck’s love for iconic turn-of-the-20th-century melodic structures and the range of emotions they express. It is also interesting to note that the “keepsakes” pictured in the album artwork are actual heirlooms from Bjorck’s family, making this album deeply personal yet universally relatable.

Keepsakes in the Attic begins with “Afternoon Reverie,” setting the nostalgic tone of the album with bittersweet grace and elegance. “Returning Home” recalls times driving long distances back to Bjorck’s hometown to visit his parents and the homesick feelings he experienced as he revisited familiar places along the way - feelings that were immediately cured as soon as he walked through the front door. “Grandad’s Rocker” affectionately recalls an old rocking chair and the person who occupied it before it came to his own family - ah, the tales a chair like that could tell! “Hearts Far Apart” was inspired by Bjorck’s own yearning for his wife when they are far apart. With tangible musical expression of deep love, this is an especially moving tribute. “Groom’s First Waltz” is much lighter and happier, reminding me in places of my favorite hymn, “In the Garden.” It begins tentatively, imagining a young groom unaccustomed to dancing, and becomes more confident and flowing as he relaxes and enjoys the dance with his new bride - a sweet and delightful piece! “Hope in the Heartache” is something of a sequel to Bjorck’s 1991 composition, “Waiting For Farewell,” composed during the last weeks of his father’s life. With the recent loss of one of his closest friends, this newer piece is dedicated to his memory and to the hope of seeing him (and his father) again one day. The lighter tone of the closing section reflects on that hope. “Playing Catch with Dad” happily recalls a favorite childhood pastime and time spent with a beloved father. “Justine of County Clare” feels like an older hymn and recalls stories Bjorck’s mother told him about his grandmother, who died two years before he was born. “Nana’s Music Box” ends this beautiful album with an imaginary keepsake, an antique music box that a loving grandmother would allow her small grandchildren to play when they visited her. Played in the upper registers of the piano, this gentle little piece gradually trails off at the end, suggesting that the lid of the music box has been left open so “the echoes and memories can continue on in the listener’s heart.”

I have enjoyed all of Jeff Bjorck’s albums, but I think this is his best and most personal album yet. It is available from www.purepiano.com, Amazon, iTunes, and CD Baby. Very highly recommended!
December 16, 2015
This review has been tagged as:
Kathy's Picks
Jeff's Website Jeff's Artist Page on MainlyPiano
Album Links
Amazon (referral)iTunes
This site contains affiliate links to products. We may receive a commission for purchases made through these links.
More reviews of Jeff Bjorck albums 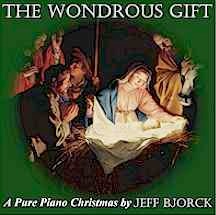 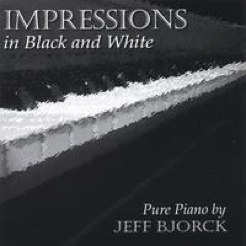 Impressions in Black and White
2005