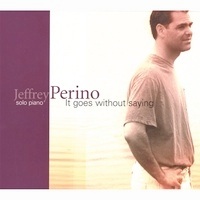 Jeffrey's Website Jeffrey's Artist Page on MainlyPiano
Album Links
Amazon (referral)iTunes
This site contains affiliate links to products. We may receive a commission for purchases made through these links.
It Goes Without Saying
Jeffrey Perino
2008 / Circle of 5 Productions
49 minutes
Review by Kathy Parsons
Jeffrey Perino’s debut album, It Goes Without Saying, is a collection of fifteen original piano solos that are very gentle and accessible. After resuming classical piano lessons as an adult, Perino discovered Jim Brickman’s music. Brickman’s simple melodies were much easier to grasp than classical music, and inspired Perino to start composing his own music. The pieces on this CD were composed over a ten-year period and reflect various life changes, major as well as everyday. The overall mood of the album is light and optimistic, although there are some more serious moments. In general, this album is very easy to “get” the first time you hear it, but the pieces are substantial enough to grow and expand with repeated listens. The song titles are a bit cryptic, allowing the listener to interpret what they mean and how they go with the music itself.

The CD begins and ends with “Ashley’s Song,” a piece composed during Perino’s one-year engagement to his wife. The piece was first shared on their wedding day and obviously has some very deep emotions running through it - a lovely piece. The ending reprise has voices added and is much shorter, so it’s not a duplication of the first track. “And You Say To Yourself” is an interesting piece with a repetitive left hand pattern at the beginning that gives it a slight sense of urgency. The middle section is more flowing, and then the first movement returns, a little lighter and more resolved. “Lately It Seems” is much more reflective, working something out at the piano - a favorite. I also like “We Couldn’t Have Guessed,” which is a bit more dramatic than some of the other pieces. It has several themes effectively interwoven and tied together with a repeated left hand pattern. “It’s More Than That” is more quietly introspective and very calming. My favorite track is “This, That, and The Other Thing.” Beginning with an effervescent theme reminiscent of Mozart or Haydn, the carefree mode shifts to a minor key in the middle and gets much darker and more dramatic. The closing theme is lighter, although not as bubbly as the first. “Is That Why You Called?” is melancholy and pensive. “By and Bye” kind of wraps things up and brings us to the closing version of “Ashley’s Song.”

It Goes Without Saying is an impressive debut, and we’ll hope Jeffrey Perino can get enough composing time to get a second album together in less than ten years! The CD is available from jeffreyperino.com, cdbaby.com, amazon.com, and iTunes.
December 6, 2007
This review has been tagged as:
Debut Albums
Jeffrey's Website Jeffrey's Artist Page on MainlyPiano
Album Links
Amazon (referral)iTunes
This site contains affiliate links to products. We may receive a commission for purchases made through these links.