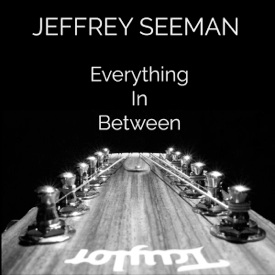 Jeffrey's Website Jeffrey's Artist Page on MainlyPiano
Album Links
AmazoniTunes
This site contains affiliate links to products. We may receive a commission for purchases made through these links.
Everything in Between
Jeffrey Seeman
2015 / Harpeth River Records
43 minutes
Review by Kathy Parsons
Everything in Between is a remarkable new album by slide and pedal steel guitarist Jeffrey Seeman. Produced by Will Ackerman and recorded at his Imaginary Road Studio in Vermont, the album also features many of the stellar artists affiliated with Imaginary Road. The project was born after Seeman shared some YouTube videos with Ackerman in the fall of 2014 and Ackerman suggested that they make a record together. Co-produced and engineered by Tom Eaton, the sound quality of the album is superb, showcasing the beautiful subtleties of these instruments and their uniquely American sound. Seeman explains on his website that slide or bottleneck guitar is a technique introduced by African blues artists in the 1920s when a cylinder (originally an actual bottle neck) was worn on the finger and held against the strings to control string pitch instead of fingering the strings between the frets. He also says: “Craftsman deep socket wrenches are another great choice, the smooth chrome making an ideal playing surface, and - lol - you can go to Sears and fit yourself for just the right size!”

Everything in Between begins with “5 Days Old,” a piece written in the studio between recording the other tracks. It got its name when Will asked "What's this one called?" Jeffrey replied "Well it's only five days old..." It features Seeman (guitars), Michael Manring (bass), Noah Wilding (vocals), Tom Eaton (keyboards), and Jeff Haynes (percussion). Blending a gentle energy with soothing, peaceful sounds makes this an excellent start! “Acadia Walk” picks up the pace a bit, although it’s wonderfully easy-going and carefree - and my favorite track on the album. Tom Eaton’s subtle Hammond organ is a perfect addition! “Ever Present Always” is a gorgeous duet for guitars and cello. Written in a mood of peaceful contemplation, Eugene Friesen’s soulful cello adds a beautiful voice to the mix. “Southern Night in the Woods” is both playful and mysterious - as nights in the woods can be! Paul Patterson performs on violin, viola and cello, with additional cello by Friesen. I’m not sure what it is, but the sound of this piece could only have been inspired by the deep south of the US - another favorite. “My Grand Gift” was originally written for Jeffrey’s daughter’s wedding and features the always-wonderful Charlie Bisharat on violin and Tony Levin on bass. “Jackie’s Grace” is an older tune that was dedicated to the late Jackie Kennedy Onassis. Guitars, bass, cello, organ, and percussion express beauty and quiet elegance. The closing track, “Point Well Taken” is a light and breezy duet for guitars and sax (Premik Russell Tubbs), bringing this brilliant album to a satisfying close.

Everything in Between is excellent from the first strum to the last! It is available from jeffreyseeman.com, Amazon, and iTunes. Very highly recommended!
May 15, 2016
This review has been tagged as:
Guitar musicKathy's Picks
Jeffrey's Website Jeffrey's Artist Page on MainlyPiano
Album Links
AmazoniTunes
This site contains affiliate links to products. We may receive a commission for purchases made through these links.