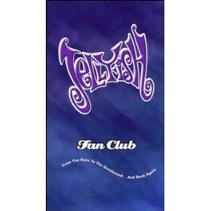 Jellyfish's Website Jellyfish's Artist Page on MainlyPiano
Album Links
Amazon (referral)
This site contains affiliate links to products. We may receive a commission for purchases made through these links.
Fan Club
Jellyfish
2002 / Not Lame Recordings
Disc 1: 62 minutes
Disc 2: 75 minutes
Disc 3: 69 minutes
Disc 4: 71 minutes
Review by Michael Debbage
Once upon time there was an artistic “animal” called Jellyfish that lived a very short yet colorful life. Destined to live in a sea of grunge, Jellyfish bucked the trend slimed in power pop with a strong enough sting to be still considered current but not trendy. Marching to a beat of their own drum, their greatest enemy was from within, and unfortunately they only managed to release two vibrant yet very essential albums. By some miracle, the small yet innovative label Not Lame Recordings managed to secure authority from EMI to release this must have box set of outtakes, demos and live tracks of the group that is no more.

This review comes with the declaration that I am one of many supporters of the Jellyfish Fan Club but I must confess that I was very late in getting on board with this group. Had it not been for the radio airplay of “Joining A Fan Club” from their second album “Spilt Milk”, I may have missed the boat completely. Fortunately, this was not the case and my reaction to this quirky yet appealing power pop band was utterly instantaneous. Integrating the vocal harmonies of the Beatles, the Beach Boys along with a touch of the multi layered Queen arrangements, Jellyfish had a retroactive feel that was still uniquely their own. Jellyfish was neither fluffy nor overbearing. Anchored by the songwriting team of Andy Sturmer and Roger Manning the group was rounded out by the presence of guitarist Jason Falkner.

With Falkner on board, Jellyfish released their freshman effort “Bellybutton” and every track is represented in this box set either via demos or live tracks. The musical range was significant from the sweet and beloved “I Wanna Stay Home” to the attitude of the Cheap Trick influenced “All I Want Is Everything”. Though it is clear that the demos represent a work in progress they certainly do not meet the status of dodgy demos. Not Lame Recordings were also able to include tracks of Beatnik Beatch that was essentially Sturmer and Manning’s spore for Jellyfish. Falkner was never able to flex his song-writing prowess and left before Jellyfish even had an opportunity to finish their sophomore effort The Sturmer/Manning writing team showed how talented they were by not needing the prolific Falkner who had his own solo success.

Jellyfish avoids any sophomore slump with the brilliant “Spilt Milk”. If you have no success finding this very limited box set, at the very least find “Spilt Milk”. This disc was fleshed out significantly with much greater depth and production detail. Once again Not Lame Records presents us with alternative takes on all but two of the studio tracks. The album had a huge sound thus the demos and alternative takes here could easily represent a complete and finished product of any other given band. But Sturmer and Manning were meticulous with every nook and cranny and the finished product was indicative of their hard work.

While “Bellybutton” comes highly recommended, to this very date the fleshed out sound of “Spilt Milk” is still my favorite. “Spilt Milk” included the radio friendly “Joining A Fan Club” with its shades of “Sgt Pepper’s Lonely Hearts Club Band”. The harmonies showed even greater complexities bringing to mind the operatic tricks of Queen. While this sophomore effort is also guitar driven, Manning’s keyboards are more prominent with a Supertramp aura to it. The most obvious parallels can be found on the bouncy “New Mistake”.

As for the live tracks, included here in its entirety is the very rare promotional live disc “Jellyfish Comes Alive” recorded at The Roxy. Though it can also be found as the bonus tracks on the Japanese version of “Bellybutton” it is wonderful to have them in one place. They are complimented by 7 tracks from Bogart’s and another 7 from the Universal Amphitheatre all of outstanding quality. Unfortunately the sound quality from the 5 live tracks from a concert at Wembley, England are not quite as precise but still a great find

I cannot deny that I was skeptical at the thought of a small label putting together a box set of a group that only had the opportunity to release two brilliant albums in their very short career. It would have been very easy to botch it with material that should have stayed in the vaults. But this is far from the case with the exception of one or two tracks. Otherwise the choices were well thought out and continue to reflect a short but well lived legacy.

Frankly, Jellyfish is a hidden treasure that many of us have missed and it is only thanks to the Not Lame Recordings staff and the cooperation of EMI that this box set has seen the light of day. But the set goes beyond the discs as the paraphernalia, photography and credits come with much painstaking detail. This labor of love also includes interview snippets and radio airplay. The most insightful is the unaccredited hidden track of “The King Is Half Undressed” at the end of disc four. This utterly bare track appears to be a radio appearance that despite the lack of studio wizardry presents a phenomenal vocal arrangement backed only by an acoustic guitar and bongos. And once again that is probably an understatement.

While Jellyfish have long since self destructed there has been several partial incarnations. These include Roger Manning’s Imperial Drag and Jason Falkner’s previously mentioned solo work. The most surprising effort manifested itself courtesy of the Umajets that featured Tim Smith that played bass on “Spilt Milk”. Imitation is a very sincere form of flattery and contemporaries such as Oxley, Tal Bachman and The JTG Implosion continue to carry on the spirit of Jellyfish. But if you are craving the real thing this box set is a must. The body of work is so impressive that this is not just for the completists. And considering the exhaustive blood, sweat and tears of this archive release, short of a reunion there is no better time than now to join the fan club. It is never too late and it is worth every retail penny.
November 6, 2010
This review has been tagged as:
Ageless Favorites
Jellyfish's Website Jellyfish's Artist Page on MainlyPiano
Album Links
Amazon (referral)
This site contains affiliate links to products. We may receive a commission for purchases made through these links.