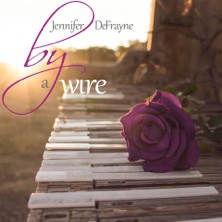 Jennifer's Website Jennifer's Artist Page on MainlyPiano
Album Links
Amazon (referral)iTunes
This site contains affiliate links to products. We may receive a commission for purchases made through these links.
By a Wire
Jennifer DeFrayne
2014 / Little Hartley Music
49 minutes
Review by Michael Debbage
Every reviewer relishes the opportunity to hear a new impressive artist and Jennifer De Frayne is one of them. Her music will tenderly persuade you to sit up and listen and when you do your ears will be massaged into gentle submissive surrender. Her impressive debut from performance to material to production knocks it out of the musical ballpark. Enlisting the production of Will Ackerman, his A team session players and the co-production and recording label of her peer Fiona Joy results in By a Wire exuding the elements of a long term major player versus a tentative introduction.

Musically, By a Wire is anchored around the two songs “Calling Angels” and “Hope Floats” which were DeFrayne’s first recordings after suffering from a stroke back in 2009. A mother of two along with the efforts to physically rehabilitate makes this musical experience even sweeter as DeFrayne faced significant adversity and challenges yet still delivers the goods with this stellar solo debut. But that aside the music stands on its own with elements of George Winston and Liz Story intermingled within her own DNA musical style.

By a Wire may be missed by some as the album is not a walloping forceful impression but one that will plea you into a slow sweet surrender. With absolutely no filler and only one solo track, Jennifer DeFrayne has left the musical community with no doubt that her debut has sleeper hit of 2014 written all over it.
October 20, 2014
This review has been tagged as:
Debut AlbumsMichael's Favorites: 2014ZMR Winner
Jennifer's Website Jennifer's Artist Page on MainlyPiano
Album Links
Amazon (referral)iTunes
This site contains affiliate links to products. We may receive a commission for purchases made through these links.
More reviews of Jennifer DeFrayne albums

By a Wire
2014
Review by Kathy Parsons
Debut AlbumsZMR Winner 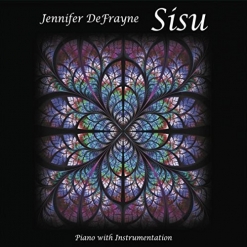