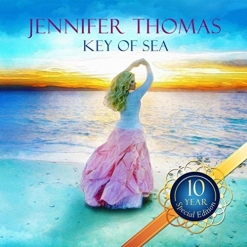 Jennifer's Website Jennifer's Artist Page on MainlyPiano
Album Links
Amazon (referral)iTunes
This site contains affiliate links to products. We may receive a commission for purchases made through these links.
Key of Sea (10 Year Special Edition)
Jennifer Thomas
2017 / Tickled Ivory Music
62 minutes
Review by Michael Debbage
Back in 2006’s this reviewer was so late to the party of newcomer Jennifer Thomas’ impressive debut recording the Key Of Sea. Well ten years later that will be rectified as while Thomas has taken the time to revisit, revitalize and resurrect her already remarkable debut release it is time for that same tardy reviewer to timely revamp and repost his review. Simply put the impressive cross pollinating experimental and intriguing but also exquisite and invigorating album has been even more improved upon with its remastered sound plus four bold bonus tracks. So much so that the beautiful warmth to the music and enthralling melodies of Thomas’ maiden voyage that caught us by surprise 10 years ago will have you falling in love with the music all over again.

So what is the special in this 10 Year Special Edition? It has been affirmed with Thomas that the original tracks have been remastered with the volume levels raised with a little reverb to aim more for a concert-hall atmosphere instead of a living room ambience. In addition, the vocal track “O Mio Babbino Caro” was not included and the original lightly orchestrated “Somewhere” was replaced with a stripped back solo performance. The inclusion of the original would have been preferred with the solo version included as a bonus track but that is about the only complaint about this essentially ideal debut’s enhanced edition.

As for the original album the original compositions are interwoven with adaptations of other composers though personalized by Jennifer with her own variation of the theme. In fact, the album begins with one such arrangement via her take on MacDowell‘s Piano Concerto No.2 courtesy of her interpretation entitled “A Beautiful Storm”. The song begins slowly as Jennifer continues to work the entire range of her piano, complimented by sweeping orchestrated strings. The song is moody and intense and is a very impressive opener. Equally as remarkable is her interpretation of J.S. Bach “Cello Suite No.1 in G Major” courtesy of "Suite Dreams." This song also features fellow artist and mother Carolyn Southworth on violin and it is utterly breathtaking. Turn up the volume to fully enjoy this beauty.

But Key Of Sea is not just about Jennifer’s interpretations of someone else’s music. Pay close attention to her own compositions and you will quickly note her gift of composing her own material. Skip forward to “Will’s Song” that is both reflective and rambunctious with its delicate piano work countered by her colorful orchestrated string arrangements. Equal to the task are the extraordinary “Old Movie Romance” and “Pure” that focus more on Jennifer’s top draw piano work that is skillful, precise yet fluid and warm. Much like her peer William Joseph, she has the keen sense and ability to present her gift of playing with a sense of warm affection and adventure. This is best heard on the thunderous “The Tempest”, though at times its seductive qualities would suggest renaming it “The Temptress”. Either way the results are sensually sumptuous.

As for the four bonus tracks at the end they are extended, reorchestrated and/or remixed. Of the four tracks, “Release” features the greatest makeover with Glen Gabriel adding his orchestration magic. However, the makeovers on “The Tempest” and “A Beautiful Storm” are equally big and bold transitions. On the latter the syncopation of the percussion with the melody certainly brings home musically the visions of a storm's lightning and slightly delayed majestic thunder.

Jennifer Thomas’ debut album, from the sleeve photography, production to the astonishing musical contents, was more in line with a veteran who had been creating music for years. That reviewer who was late to the party predicted many more brilliant musical moments from this relatively newcomer Jennifer Thomas. And needless to say she has completely delivered to date. For those of you that missed the debut then don’t be late to the party this time. Those of you that have already been to the dance and are wondering whether or not to resist this new rendition open your wallet now….it is worth every penny!!!

October 28, 2017
This review has been tagged as:
Michael's Favorites: 2017Michael's Picks
Jennifer's Website Jennifer's Artist Page on MainlyPiano
Album Links
Amazon (referral)iTunes
This site contains affiliate links to products. We may receive a commission for purchases made through these links.
More reviews of Jennifer Thomas albums

The Lullaby Album
with Carolyn Southworth
2009
Review by Michael Debbage