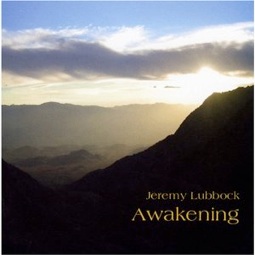 Jeremy's Website Jeremy's Artist Page on MainlyPiano
Album Links
Amazon (referral)iTunes
This site contains affiliate links to products. We may receive a commission for purchases made through these links.
Awakening
Jeremy Lubbock
2006 / Rex Recordings
67 minutes
Review by Michael Debbage
For many of you this may not be a familiar name but many of you will be surprised to learn that you have already been touched by his music or arrangements without even knowing it. Lubbock has composed and arranged for the likes of Whitney Houston, Chicago, Celine Dion, Michael Jackson and Lionel Ritchie just to name a few. The most prominent name association for this reviewer would be David Foster where Jeremy Lubbock’s DNA is stamped all over one of Foster’s best solo albums The Symphony Sessions. If you are familiar with the previously mentioned album then there is no doubt that Awakening just like the rising early morning sun will slowly and gently arouse your soul.

Unlike Foster who aims at the emotional jugular, Lubbock aims for a more graceful and eloquent result with his compositions and arrangements deeply founded in the bed rock of a soft slow soul stirring sensation. Frankly all 67 minutes of Awakening is not only on target but composition after composition they hit the bulls-eye over and over again. While this reserved but emotive gem focuses on Lubbock’s magical instrumental arrangements, he does not hesitate to include 4 vocal renditions performed by the very different styles of Darlene Koldenhoven and Chaka Khan. Darlene actually opens the album with the title track with an extended string and horn arrangement introducing Koldenhoven’s unspoken lyrics adding to the reserved exotica. Meanwhile Chaka’s performance on “How Many Lives To Go” is beyond impressive with a very soulful controlled performance.

While the vocal performances are a wonderful addition to Lubbock’s arsenal, it is the instrumentation that is the lifeline and blood to this beauty. Just listen to the classically influenced “Sing Thee To They Rest”, “Wings Of Love” or “Cry No More” with a huge emphasis on a full crystal clear orchestration. It does not hurt to have Quincy Jones’ engineer Bruce Swedien, famous for his work with Michael Jackson. If it were at all possible things get even better on “Communion” where Lubbock’s string arrangements “break bread” with the brilliant guitar work of Oscar Castro-Neves truly living up to the title of the song.

Before Awakening ends, Lubbock finds the time to share an old friend in the form of “The Ballet” that he co-wrote with David Foster previously featured on Foster’s 1988 The Symphony Sessions though this time around its Lubbock who graces the piano. “The Ballet” is as beautiful now as she was back then and the same can be said with Awakening whose magic is encapsulated in its slow endearing seduction that will leave you craving an enduring musical affair for years to come.
June 9, 2006
Jeremy's Website Jeremy's Artist Page on MainlyPiano
Album Links
Amazon (referral)iTunes
This site contains affiliate links to products. We may receive a commission for purchases made through these links.