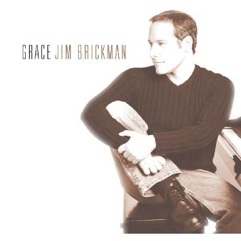 Jim's Website Jim's Artist Page on MainlyPiano
Album Links
Amazon (referral)iTunes
This site contains affiliate links to products. We may receive a commission for purchases made through these links.
Grace
Jim Brickman
2005 / Windham Hill
44 minutes
Review by Michael Debbage
Jim Brickman has released a plate load of platters over a short period of time. In recent years his projects have included collaborations with artists from the Christian music genre such as Susan Ashton, Point Of Grace, Michael W. Smith, and Mark Schultz to name a few. This time around Brickman decided to pay respects to his own personal faith by revisiting many of Christianity’s traditional hymns. Though Brickman places his spin on things with his smooth fluid touch of the keys, while customized, the foundations of the song structure are left intact with great respect.

Once again Brickman includes several vocal performances. In fact, the album begins with one courtesy of Ginny Owen’s rendition of the beloved hymn “Amazing Grace”. Of the 13 tracks present 4 of them are vocal presentations, which include Michael Bolton on the self penned “Hear Me (Tears Into Wine)” that concludes the album. Needless to say the performance is very powerful and though mixed in with the traditional hymns it is not out of place. Speaking of self penned compositions, Brickman sprinkles in the occasional instrumental track too. The most successful composition is the optimistic “Seventh Day” that also features the soft, surreal and soulful guitar work of Chris Korblein.

On the more traditional side there is the wonderful rendition of “Crown Him With Many Crowns”. This song also includes a reserved but vivacious violin performance that we have come to expect from guest Charlie Bisharat. Along with the keyboard embellishments from producer David Grow, the interpretation, much like the original hymn is inspirational. Perhaps the untouched and naked “O Sacred Head Now Wounded” is more your cup of tea. Two different approaches to these very traditional hymns yet with the very same results...poignant.

In fact, this is more the norm versus the exception. The only song that comes across a little tepid would be the vocal rendition of “Ava Maria”. Though this may be somewhat due to the fact that they have been too many interpretations of this song that perhaps it suffers in comparison. Even still a worthy inclusion, but just not the preferred choice.

It has been over ten years since Jim Brickman arrived on the scene with his Windham Hill debut No Words. With the exception of last years compilation retrospective there has been no looking back. Brickman has become the James Taylor of contemporary instrumental music. He consistently produces a quality product that although safe is always most pleasant and enjoyable to listen to no matter what mood you are in. Though Grace has a specialized theme it continues to meet the high standard one has come to expect from Brickman.
January 1, 2005
This review has been tagged as:
Michael's Favorites: 2005
Jim's Website Jim's Artist Page on MainlyPiano
Album Links
Amazon (referral)iTunes
This site contains affiliate links to products. We may receive a commission for purchases made through these links.