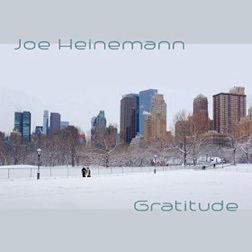 Joe Heinemann started playing the piano at the age of 7 and continued his studies until he was 20. His professional playing career began at the age of 13 in Portland, OR and it was around this time that he felt himself drawn to jazz. After completing his formal studies, Heinemann turned his attention to jazz and dance music. He also freelanced playing piano and keyboards with an assortment of bands until he was 45. He lived in Amsterdam for two years in the mid-1980s, playing locally and touring Europe - his most intensely-focused jazz-playing period. When he returned to the US, Heinemann launched a career as a jazz and blues keyboardist in Portland and San Francisco, recording and performing with many of the greats. He also formed and fronted his own group and released six recordings under his name. In 2001, Heinemann realized that something was missing, so he started teaching piano privately in the Bay Area while writing and developing his own repertoire. In 2012, he and his wife moved to New York City where he found himself wanting to play his own compositions on good pianos and for audiences who appreciate his music. During this time, Heinemann reached out to Will Ackerman, and the result is this wonderful album of piano music.

As would be expected of an artist with such a varied and in-depth life in music, Heinemann’s playing seems almost effortless in its ability to communicate ideas and emotions. Something that many young piano students have a hard time grasping is that it takes this kind of dedication and emersion in music to develop a distinctive voice and the chops to be able to express anything they want. (Oops - there’s that piano teacher in me again!)

Gratitude opens with “Lenape,” a gentle piece that begins as a piano solo and later incorporates multiple cello parts played by Friesen. The graceful ease of Heinemann’s touch on the piano keys grabs the attention immediately, letting the listener know that this album is something special. “Enduring Hope” is a tenderly optimistic solo that entrances as it soothes. Erik Satie was a French Impressionist composer who has had a strong influence on piano music for the past century or so. “For Satie” pays tribute to him and is a favorite! “Sea Dream - Away” is a gently rhythmic and flowing ensemble piece for all five musicians. The dreamy and poignant “Longing” is another favorite. Warmth and contentment flow throughout “My Song - Carried Along,” performed by the full ensemble. The closing “Late At Night” is very open and spare, expressing feelings of peacefulness, stillness, and calm.

What a great album! Joe Heinemann has certainly found his niche, and teaming up with Ackerman and Eaton was the right move. This is quiet, thoughtful piano music that would be lovely in the background, but has so much more to offer the listener who focuses on the music and savors every nuance. Gratitude is available from Amazon, iTunes, and CD Baby. Very highly recommended!
February 8, 2016
This review has been tagged as:
Debut Albums
Joe's Website Joe's Artist Page on MainlyPiano
Album Links
Amazon (referral)iTunes
This site contains affiliate links to products. We may receive a commission for purchases made through these links.