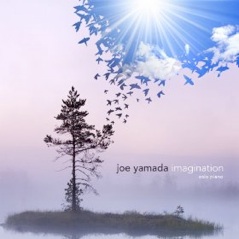 Joe's Website Joe's Artist Page on MainlyPiano
Album Links
Amazon (referral)iTunes
This site contains affiliate links to products. We may receive a commission for purchases made through these links.
Imagination
Joe Yamada
2014 / Joe Yamada Music
51 minutes
Review by Kathy Parsons
Imagination is the second full-length solo piano release from pianist/composer Joe Yamada following his 2004 CD Heartfelt. The thirteen original pieces are relaxed and soothing, romantic and from the heart. Recorded at Piano Haven Studio in Sedona, AZ on Joe Bongiorno’s Shigeru Kawai SK7L grand piano, the sound is warm, clear and very beautiful. A self-taught musician who doesn’t read music, Yamada’s playing is expressive and colorful without being flashy. The “flash” is in the sincerity of the music and how it communicates from one soul to the next.

Imagination begins with the light and breezy “Straight To the Heart.” Lively and carefree, it’s a great opening! Being from the Seattle area, Yamada knows all about the different kinds of rain! “Spring Rain” is gentle and soothing - a refreshing shower rather than a downpour. Played with a feather-light touch, this is a favorite. “Forever Love” is one of the longer tracks (6.25 minutes) and expresses tender love and devotion. The title track is based on a flowing broken chord pattern that is sometimes in the foreground and sometimes in the background. I love the middle section as it becomes more dramatic, with dark accents in the deep bass of the piano. The slow and graceful “Beneath the Stars” expresses a sense of wonder but is also very peaceful and contented - another favorite. “The Storm” picks up the tempo, dancing and swirling around the piano keyboard as it tells its tale of wind and rain. The “eye” of the storm in the middle of the piece becomes calmer as the storm gradually gathers strength and rebuilds its energy to a climax and then fades out - a great piece! (Sheet music???) I’m so glad “Forgotten Melody” was remembered, as this is a real beauty! Very gentle and free, it has an almost conversational style that works really well, conveying a blissful kind of calm. The title for “Left All Alone” is a play on words since the whole piece is played with the left hand! I wouldn’t have guessed it was a one-handed performance! “A New Road” expresses the excitement and anticipation of change and going in a new direction. “Baby Boy” brings this beautiful album to a close with the joy and wonder of new life - also a favorite.

Hopefully it won’t be so long between albums next time, but Joe Yamada has given us much to enjoy and savor with Imagination. It is available for download on joeyamada.com, Amazon, and iTunes. Recommended!
March 14, 2014
Joe's Website Joe's Artist Page on MainlyPiano
Album Links
Amazon (referral)iTunes
This site contains affiliate links to products. We may receive a commission for purchases made through these links.
More reviews of Joe Yamada albums