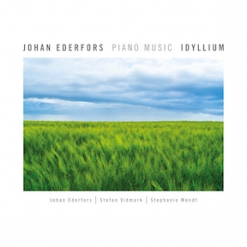 Johan's Website Johan's Artist Page on MainlyPiano
Album Links
Amazon (referral)
This site contains affiliate links to products. We may receive a commission for purchases made through these links.
Idyllium
Johan Ederfors
2019 / EDE 519 Records
58 minutes
Review by Kathy Parsons
Idyllium is a collection of fifteen original piano solos by Swedish composer Johan Ederfors. Guest artists perform five of the pieces (Stephanie Wendt, two, and Stefan Vidmark, three) and Ederfors performs the other ten. Ederfors has been an active composer for more than twenty-five years. He has composed a wide variety of music, most of which has been instrumental and classical in style. The fifteen tracks on Idyllium range from classical to a more contemporary sound with pop and new age influences. The whole album expresses warmth and optimism, making it a real pleasure to listen to with full attention or in the background. The music is not flashy or virtuosic, but instead expresses emotions that come from the heart. I have listened to Idyllium in several different settings and found it to be a perfect fit every time.

The album begins with “The Thiel Gallery,” which was inspired by a major gallery of 20th-century Scandinavian and French art in a wealthy art patron's former residence in Stockholm. A variety of moods are conveyed, from light and buoyant to darker and heavier, while expressing the magic of being in the presence of great art. “The Little One” is a sweet little piece that could have been composed during the late 1700’s or early 1800’s. Light and playful, it’s a charmer! “Grand Piano Waltz” harkens back to a simpler time when people got together and danced as a form of entertainment. “The Graceful Cat” has a more Baroque flavor that is mostly gentle, but crescendoes to more powerful passages throughout the piece. “Autumn Walk” reminds me a bit of some of Scott Joplin’s charming waltzes with its lighthearted expression and sense of fun. “The Light of the Deepest Forest” is a favorite. Sometimes very dark and a little scary and sometimes much lighter, it suggests very beautiful images. The title track is a carefree and joyful dance that will surely bring a smile to your face! “Good Atmosphere” is one of the more contemporary pieces and again expresses warmth and happy thoughts. “Down By the Road” has an easy, relaxed spirit that feels much like being out in the country on a warm spring day without any worries or stress. “Pre-Summer Tune” expresses similar feelings but in a somewhat different style. You can almost picture the movement of the grassy field in the cover artwork and feel the warmth of the sun on your face - blissful! I hope “The Last Tranquil Waltz” really isn’t the last one, but it brings this lovely album to a close.

Johan Ederfors and company have created a beautiful collection of feel-good music with enough substance to stay both fresh and refreshing for a long time. It is available from Amazon and many streaming stations as well as www.ederfors.se.

July 22, 2019
This review has been tagged as:
ClassicalKathy's Picks
Johan's Website Johan's Artist Page on MainlyPiano
Album Links
Amazon (referral)
This site contains affiliate links to products. We may receive a commission for purchases made through these links.