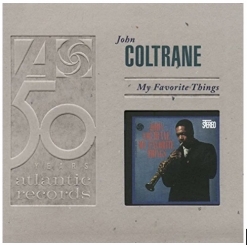 Coltrane's Artist Page on MainlyPiano
Album Links
Amazon (referral)
This site contains affiliate links to products. We may receive a commission for purchases made through these links.
My Favorite Things - Special Edition
John Coltrane
1998 / Atlantic Records
46 minutes
Review by Steve Yip
One of my musical joys is this record and specifically this particular recording by the great jazz saxophonist and composer, John Coltrane. This album is populated by versions of several Broadway show tunes, and this one shines and shines. "My Favorite Things" without denial has been confiscated and reimagined from the Broadway musical and movie, The Sound of Music. Some of us old heads may conjure up Julie Andrews’ memorable and lasting rendering in the personae of Maria von Trapp. (By the way, to be a little controversial, I find the lyrics are a bit self-centered. But considering the context of that musical historical background, finding comfort in face of German fascism’s menacing takeover of Austria ... understood.)

John Coltrane’s rendition of My Favorite Things takes us on a floating journey, a mesmerizing flight to a really calm and clarifying place. First released in 1961, it predates Coltrane’s pathbreaking A Love Supreme (1965). In My Favorite Things, we find an august backup band composed of the great pianist McCoy Tyner, bassist Steve Davis, and Elvin Jones on drums.

On side one, Coltrane is representing with a soprano saxophone, for the first time on a recording. The Eastern influences in Coltrane’s development of his music are evident here. And his solos are driven by a soprano saxophone reputedly given to him by Miles Davis. On side two, he returns to the tenor saxophone. In the remainder of this album, one will find several other show tunes all classically showcased with Coltrane having his sidemen conducting some excellent solos. Coltrane does good too. The other tunes include the old favorite from Porgy and Bess, "Summertime."

I first learned of John Coltrane on the day he passed. Not yet 17 years old, I was a fervent listener of the early alternative San Francisco rock radio station KMPX-FM. And on that day, they played his monumental work, A Love Supreme in his honor and memory. Despite that introduction, as a fan of the radiating San Francisco psychedelic and folk-rock music scene, I had not fully embraced Coltrane’s oeuvre. But leave it to My Favorite Things, as I entered college, that piece was the portal I embraced that had me converted into a Coltrane follower. As explained on Wikipedia, “On March 3, 1998, Rhino Records reissued My Favorite Things as part of its Atlantic 50th Anniversary Jazz Gallery series. Included as bonus tracks were both sides of the ‘My Favorite Things’ single, released as Atlantic 5012 in 1961.” And the live recording of My Favorite Things (Impulse) from 1965-67 is also a terrific listening experience.

-30-
April 13, 2022
This review has been tagged as:
Jazz
Coltrane's Artist Page on MainlyPiano
Album Links
Amazon (referral)
This site contains affiliate links to products. We may receive a commission for purchases made through these links.