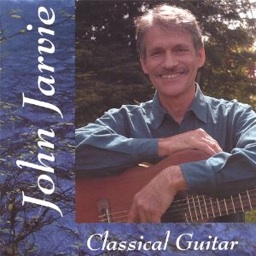 John's Website John's Artist Page on MainlyPiano
Album Links
Amazon (referral)iTunes
This site contains affiliate links to products. We may receive a commission for purchases made through these links.
Classical Guitar
John Jarvie
2007 / John Jarvie
60 minutes
Review by Kathy Parsons
The simply but aptly titled Classical Guitar is the debut CD by classical guitarist John Jarvie, a wonderful artist and teacher from Eugene, Oregon that I have been privileged to host in concert at my house several times. Like his live performances, Jarvie has presented a fascinating mixture of music on this CD. The majority of the eighteen pieces come from Spain and Latin America, but Jarvie also arranged the prelude from the Bach Cello Suite #1 and Isaac Albeniz’s “Asturias,” which was originally composed for piano, and included the Japanese “Sakura.” The pieces express a wide range of emotions as well as guitar stylings, but the program flows very evenly without any jarring changes. Jarvie is a master guitarist and arranger, and even builds his own guitars. Anyone who appreciates fine instrumental music will find much to love about this album.

Classical Guitar begins with the haunting “Prelude #1” by Heitor Villa-Lobos, which was inspired by a journey up the Amazon River. The three-movement “La Catedral” by Augustin Barrios is an evocative and stirring tribute to the Church as the spiritual center of traditional Latin American culture. “Romance Antigua” is an charming older piece often played as a serenade for young lovers. “Sakura (Variations)” comes from the beloved traditional Japanese folk song and sounds right at home on the western acoustic guitar. Jarvie’s performance is amazing! “Se Io M’accorgo” was found in a book of lute music from 16th century Italy and works beautifully on guitar, as does JS Bach’s “Prelude” from “Cello Suite #1.” “Paraguayan Dance #3” by Barrios is a joyful and very lively piece that is sure to bring a smile to your ears! Enrique Granados’ “Dedicatoria” was originally composed for piano, but is perfect on guitar with its simple, heartfelt melody and gentle tone. “Recuerdos de la Allhambra” is a favorite. Composed by Francisco Tarrega, the mood is deeply nostalgic and overflows with longing. Gorgeous! I love “Asturias” by Isaac Albeniz, a true classical guitar classic. Very intense and on the dark side, this is an exciting finish to a great album!

Classical Guitar is available from Amazon, iTunes, and CD Baby as are some individual pieces that Jarvie has released (check out his arrangement of “Fur Elise”!!!). This is an outstanding album and I recommend it very highly!
September 15, 2012
This review has been tagged as:
ClassicalDebut AlbumsGuitar music
John's Website John's Artist Page on MainlyPiano
Album Links
Amazon (referral)iTunes
This site contains affiliate links to products. We may receive a commission for purchases made through these links.
More reviews of John Jarvie albums 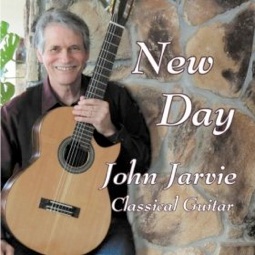