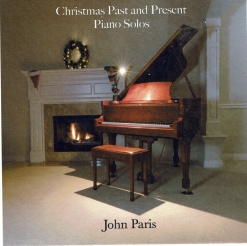 John's Website John's Artist Page on MainlyPiano
Album Links
Amazon (referral)iTunesSpotify
This site contains affiliate links to products. We may receive a commission for purchases made through these links.
Christmas Past and Present
John Paris
2016 / Paris Original Music
55 minutes
Review by Kathy Parsons
Christmas Past and Present is the third solo piano Christmas album from jazz pianist/composer/arranger John Paris. This one is a little different in that some of the thirteen carols and songs are less-often heard than the songs on the first two albums. Most of the tracks will be familiar to many listeners, but three are new compositions by Paris (one is his first vocal recording!). A lifelong musician and performer, Paris’ piano playing is effortless, expressive and often a lot of fun. I hosted the album release concert here at MainlyPiano.com about ten days ago, and the audience loved it, giving Paris a standing ovation at the end. Most of the songs on the album are upbeat and joyful, but there is a beautiful mix of jazz piano styles, moods and sentiments expressed in the music, promising that this will be a favorite album for many Christmases to come.

Christmas Past and Present begins with “Christmas Is Coming,” arranged in a lively tropical style that suggests sandy beaches and swaying palm trees - a great start! As a music innovator himself, I’m sure Beethoven would give a very positive nod to Paris’ jazzy take on his “Ode to Joy” (if you recall, old Ludwig didn’t smile much!). Paris makes this classical favorite his own by adding improvisations and catchy rhythms to this very familiar theme. “A Waltz For Christmas” is the first of the three original pieces. The inspiration came to Paris while he was driving and was so intense that he had to pull over and jot the ideas down. He visualized a couple dressed in white waltzing to this beautiful piece. Slow, graceful and very romantic, it’s a favorite. “Sing We Now of Christmas” is a traditional French carol that lends itself well to Paris’ lively jazz treatment. Paris’ own “Christmas Bells” has a Celtic dance feeling that will get your toes to tapping and your head to bobbing. Paris does a great job of making the piano sound percussive in places to imitate the sound of church bells. “I Heard the Bells” is a beautiful slow solo piano jazz arrangement based on Burl Ives’ version from years ago. Deeply emotional and a bit on the dark side, it’s a touching piece! I haven’t heard many jazz arrangements of “O Holy Night,” but this one really works. My favorite track on the album is “O Come Emmanuel.” Very dark with lot of pedal and accents in the deep bass of the piano, it sounds like it was recorded in a echoing monastery. Paris’ improvisations between the verses are atmospheric and haunting - love it!!! Paris’ “The Santa Shuffle” is his first recorded vocal. With the boogie-woogie left hand and bluesy melody, this light-hearted song could become a new Christmas classic. Paris ends the album with a new arrangement of “We Wish You a Merry Christmas.” As effervescent as a glass of bubbly, this is sure to put a smile on your face!

John Paris has won the award for “Best Jazz Album” from Enlightened Piano radio the past two years, and Christmas Past and Present will clearly show you why! It is available from iTunes and CD Baby. Very highly recommended!
December 12, 2016
This review has been tagged as:
Holiday AlbumsHoliday Albums: 2016Kathy's Picks
John's Website John's Artist Page on MainlyPiano
Album Links
Amazon (referral)iTunesSpotify
This site contains affiliate links to products. We may receive a commission for purchases made through these links.
More reviews of John Paris albums 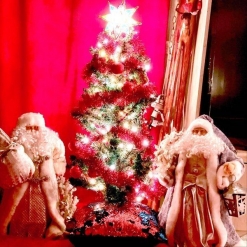 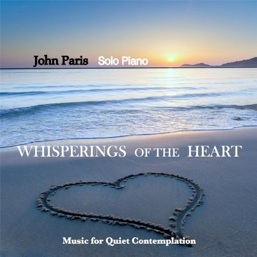 Whisperings of the Heart
2015 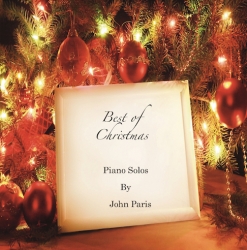