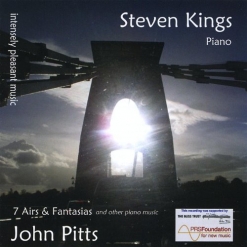 John's Website John's Artist Page on MainlyPiano
Album Links
Amazon (referral)
This site contains affiliate links to products. We may receive a commission for purchases made through these links.
Intensely Pleasant Music: 7 Airs & Fantasias and Other Piano Music
John Pitts
2008 / John Pitts
78 minutes
Review by Kathy Parsons
Intensely Pleasant Music: 7 Airs and Fantasias and Other Piano Music is a collection of pieces composed by John Pitts and performed by pianist Steven Kings. There are sixteen tracks in total, but seven of those are paired as Airs and Fantasias. The opening piece, “Changes,” is a piano duet performed by Kings and Pitts; the others are solo. Although Pitts’ sense of humor often shines in the music, this is serious classical music, some of which is atonal and somewhat chaotic, but several tracks - especially the Airs - are elegant and very beautiful. Pitts has music degrees from Bristol and Manchester Universities (UK) and several of his works have received awards. He has also composed music for Christian worship, plays, and operatic works. One of the short operatic works, titled “Three Sliced Mice,” was commissioned by Five Brothers Pasta Sauces! Kings is also from the UK and received his musical training at the King’s School in Worcester, St. John’s College Cambridge and the Guildhall School of Music and Drama. He started performing in the 1980’s and continues to perform as a soloist, accompanist, and chamber musician. The album was recorded in August 2008 on a Steinway Model D grand piano.

The album begins with “Changes (For Twenty Nifty Fingers)” a very intense duet for four hands, one piano. While I appreciate the challenge of overlapping parts and keeping track of a 14/8 rhythm, it’s a bit jarring to my ears. “Toccata: Blue Frenzy” is also very intense and discordant as well as technically-demanding. At close to ten minutes, it’s rather challenging for the listener as well. After those two pieces, “Air 1: Gentle Interweaving” came as an “intensely pleasant” surprise! Much more melodic and flowing, I really like this one! “Fantasia 1: Clockwork 5/4” is very intricate, with each hand performing a part quite different from the other. It begins in the upper registers of the piano with the left hand keeping a steady tempo while the right hand freely dances. The piece becomes darker and more mysterious as it evolves. “Air 2: After Satie” is a favorite. The references to Erik Satie are there, but with variations that are not so obvious. “Fantasia 2: On the Westminster Chimes” is a piece for prepared piano with “a small plastic ruler secured loosely in place over middle C to the E above, another ruler wedged between 2 of the 3 F strings, and a bent metal ruler from the next C up over a further octave.” Of course, these objects completely change the sound of the piano and the variations on the Chimes range from fairly quiet to brash and chaotic. It’s definitely interesting! “Air 3: On An Anagram” has obvious references to Chopin, with a dark, haunting melody that expresses deep emotion - another favorite. “Air 4: Sarabande” is also a favorite. Slow and somewhat brooding at the beginning, it picks up momentum in the middle, and then slows and calms, rebuilding energy to the end. “Fantasia 4: Wind Chimes” is a fascinating exploration of the seemingly random sounds and rhythms of wind chimes. Airs and Fantasias #6 and 7 “inhabit a different harmonic world to the other pieces, using a collection of chord relationships called ‘Twisted Harmonies’.” These are quite interesting, but I prefer the first five pairs.

Intensely Pleasant Music: 7 Airs and Fantasias and Other Piano Music isn’t for the casual listener or for someone looking for music to fall asleep to - to wake up to, maybe, but it won’t make you sleepy! For those up for a bit of a listening challenge, check it out! It is available from Amazon and CD Baby.

March 27, 2017
This review has been tagged as:
Modern Classical
John's Website John's Artist Page on MainlyPiano
Album Links
Amazon (referral)
This site contains affiliate links to products. We may receive a commission for purchases made through these links.