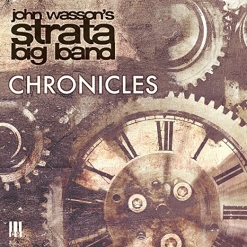 John Wasson's Strata Big Band's Website John Wasson's Strata Big Band's Artist Page on MainlyPiano
Album Links
Amazon (referral)Apple/iTunesSpotify
This site contains affiliate links to products. We may receive a commission for purchases made through these links.
Chronicles
John Wasson's Strata Big Band
2022 / MAMA Records
54 minutes
Review by Steve Yip
Chronicles is a wonderful find I discovered when Kathy Parsons presented an array of music for possible review from Dr. Jazz. Stumbling through unfamiliar names of artists and bands, I settled on the BIG BAND. I admit to be pretty parochial in my musical tastes, though some may say it is fairly varied and eclectic for some. Within the genre of jazz, I tend to reside in a few chosen artists and bands, while I have a broader view though again, tendencies to be enclaved within the confines of “classic rock” and blues-based renderings.

First off, I never heard of John Wasson before, but the Big Band tag helped me with a decision to dive into listening. The criteria applied was easy: I started liking big band music after a really nice musical performance during a junior high school assembly back in Oakland. That’s a looong time ago. I was so delighted with the broad range of music I found all based from Texas!

Things were also helped with the inclusion of a great booklet which provided a historical background of John Wasson and his work. Great to write about this stellar collection of music, but I shall not plagiarize, so being lazy, I will quote directly: “John Wasson is an award-winning composer, arranger, performer and conductor whose works have been performed by world-class orchestras and performers world-wide! ...Chronicles offers intense swing, infectious funk and driving clave, lush ensemble sonorities, sensitive solo showcases and fresh, reimagined classics!” I cannot agree enough.

The ensemble Wasson has mobilized into his Strata Big Band includes many, many teachers and professors of music. The musicians are all recognized and listed in the accompanied booklet, which is also available on the band’s website. Foundational is, of course, a big band sound that travels several genres and brings the joy of a wall of sound. This summer I attended two live concerts by Arturo O’Farril’s Afro Latin Jazz Orchestra in New York, which bolstered my lean towards big bands whatever its genre. And the Strata Big Band satisfies that need.

So let’s break down some selections without dissing the other numbers.

"Heat-Seeker," composed by Wasson, kicks off with a high energy horn introduction that flows like a mellow running river with fine solos; "Funk City," also composed by Wasson, and is offered as a “shoutout to a well-known Bay Area funk band.” No mention is made of that particular band, but speaking as an Oakland CA native, that has got to be props to the hallowed virtuosity of Tower of Power, Y’all! "Tank!" is by Japanese composer Yoko Kanno as the title theme for Cowboy Bebop anime series (the first time I’ve learned of this) and arranged by Wasson. I found in that number a flowing closeness with John Wasson’s closing number "Detective Chronicles" capturing the sonic feel delivered by the horns of old school TV detective (and spy) shows and movies -- remember “Peter Gunn”/”Batman”/”Dick Tracy”/Mission Impossible" -- and settles into a smooth tension punctuated by horns.

Other listeners may find that the other numbers -- Wasson's arrangements of Charlie Parker’s "Blues for Alice," and West Side Story’s "Maria," are just as inspiring as there is no intention of dismissing the remainder. Go for this album if a muscular wall of sound posited by a big band is something for you!