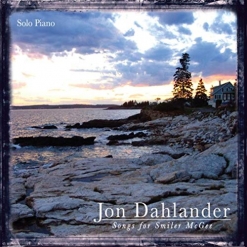 Jon's Website Jon's Artist Page on MainlyPiano
Album Links
Amazon (referral)iTunes
This site contains affiliate links to products. We may receive a commission for purchases made through these links.
Songs for Smiler McGee
Jon Dahlander
2017 / Jon Dahlander
46 minutes
Review by Kathy Parsons
I met Jon Dahlander and heard his music for the first time at the Whisperings Solo Piano Awards weekend near Seattle in 2018. He played a piece at the Whisperings Discovery Concert, which featured artists who had never played in a Whisperings Concert in the first half and a mix of the more prominent pianists on the internet broadcast in the second. Before he played, Jon introduced his piece by telling us a brief story about his special-needs son who had recently passed away. Although the piece was sad - especially in the context of the story - there was still hope and optimism in the music that made me immediately like and admire Jon. I was very impressed with his performance and looked forward to hearing the whole album. Fast forward almost a year. I was recently looking through the vast piles of CDs that I haven’t had time to review and I came across Songs for Smiler McGee, Jon’s album, which was sent to me by a promoter in 2017. I was both thrilled and horrified that I had had the album for so long without realizing it. I know that with music the old adage “it’s never too late” is very true, so here is my long-overdue review of Songs for Smiler McGee.

While reading up on the stories about both Jon Dahlander and his late son, Jared, I found this amazing article on Jon’s site. It tells Jared’s story in a way only a father could, and I highly recommend it. http://www.jondahlander.com/press/featured-billboard

In a nutshell, Songs for Smiler McGee is a collection of thirteen original piano solos inspired by the not quite 14-year life of Jared Dahlander, the first child of Jon and Heidi Dahlander. It also includes Jon’s arrangement of the classic hymn, “Be Thou My Vision,” which was played at Jared’s funeral. Born with a genetic syndrome that medical experts were never able to identify, Jared wasn’t ever able to walk or speak. Instead, he expressed himself with big smiles and cooing, touching the lives and hearts of everyone he came in contact with. “Smiler McGee” was one of his many nicknames and he loved it when his father played the piano for him. The fourteen tracks on the album overflow with emotion and a tenderness that is expressed in every note. A few of the pieces are on the sad side, but mostly they express love. Warm, gentle and very soothing, there are no dark, mournful or angry pieces - they are all reflective and full of grace.

Songs for Smiler McGee is actually Jon Dahlander’s fourth album, but he took a seventeen-year break between his first three albums and this one to care for Jared. A mostly self-taught pianist, Dahlander’s heartfelt sincerity and the expressive nature of his music more than make up for any kind of dazzling technique or blazing bravado. The album is available from Amazon, iTunes and CD Baby and is a profoundly moving listening experience.
February 16, 2019
This review has been tagged as:
Kathy's Picks
Jon's Website Jon's Artist Page on MainlyPiano
Album Links
Amazon (referral)iTunes
This site contains affiliate links to products. We may receive a commission for purchases made through these links.