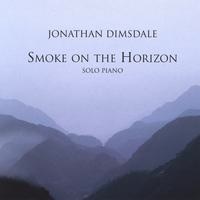 Jonathan's Website Jonathan's Artist Page on MainlyPiano
Album Links
Amazon (referral)iTunes
This site contains affiliate links to products. We may receive a commission for purchases made through these links.
Smoke on the Horizon
Jonathan Dimsdale
2004 / Jonathan Dimsdale
58 minutes
Review by Kathy Parsons
Jonathan Dimsdale’s debut recording is nothing short of spectacular. Smoke on the Horizon is a musical journey through the ups and downs in the life of an extraordinarily talented young man. At the tender age of twenty-one, Dimsdale has created a collection of original piano solos that are full of youthful energy as well as the naked and deeply-felt emotions that bubble up (and sometimes roar) as one’s life takes shape. The music varies from quiet peace to strong and turbulent, and a multitude of influences can be heard: classical, jazz, blues, the more reflective new age styles, and even some progressive rock. Some of the pieces remind me a bit of the beautiful complexity of Clara Ponty’s work; some remind me of Dax Johnson’s passionate piano solos. Dimsdale’s musical voice is clear and strong, and I’m very excited about being among the first to hear his music. Far from being ear candy, this was one of those albums that I wasn’t sure I liked the first couple of plays, but then the music started to open up and reveal itself, and I found myself often saying, “Wow!” By the fourth or fifth play, it was really getting under my skin, and it will definitely be one of my favorites for the year.

The opening track, “Daybreak,” is one of Dimsdale’s early compositions. Energetic and full of life, I was surprised when a familiar phrase jumped out at the midpoint of the piece. After a couple of takes, I identified it as a bluesy riff on David Lanz’s “She Stands On the Mountain, Still.” It’s only a few measures, but I had to ask Dimsdale about it, and it is, indeed, a nod to Lanz, the biggest inspiration to his composing. “Nightingale’s Song” is one of the quieter and more reflective tracks - very beautiful! “House of Cards” is my favorite. It begins with a quiet, plaintive melody that is very dark and sad. The emotions build to an outpouring of passion. A sweet little passage follows that seems to be musical relief, and then the opening melody returns and develops into another burst of passion that calms and becomes peaceful. An amazing piece! “The City In the Sea” is mysterious and magical. “Adrift” is another favorite. It begins very quietly and pensively, and as the title implies, has a floating, flowing quality. Toward the end, the tempo picks up and the piece resolves. “Paper Moon” has a very delicate introductory passage that becomes a series of themes that melt into each other, some carefree, some more serious. I also really like “Chasing Ghosts” with its unexpected melodic, harmonic, and rhythmic changes. Parts of it are “haunting” and mysterious, while others are upbeat and lively. The closing track, “Kaleidoscope,” is a little more abstract, with the melody and accompaniment going in almost random directions, as the shapes in a kaleidoscope do, forming beautiful colors and patterns as they move and change shapes.

Smoke on the Horizon is an auspicious beginning! Samples of the music are available on Dimsdale’s site, jonathandimsdale.com, as well as on cdbaby.com. It is also available from amazon.com. Very highly recommended!
March 30, 2005
This review has been tagged as:
Debut AlbumsKathy's Favorites: 2005
Jonathan's Website Jonathan's Artist Page on MainlyPiano
Album Links
Amazon (referral)iTunes
This site contains affiliate links to products. We may receive a commission for purchases made through these links.