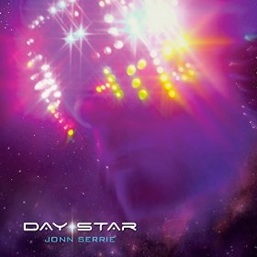 Jonn's Website Jonn's Artist Page on MainlyPiano
Album Links
Amazon (referral)iTunes
This site contains affiliate links to products. We may receive a commission for purchases made through these links.
Day Star
Jonn Serrie
2014 / New World Music
66 minutes
Review by Kathy Parsons
Over the past thirty years, Jonn Serrie’s name has become synonymous with space music. He recently released his twenty-third album of electronic music called Day Star, the second chapter in his sci-fi series that began with the 2010 release of Thousand Star. Serrie has been composing and performing music for planetariums since the early 1980‘s, and his first album, And the Stars Go With You, was in memory of the astronauts lost in the Space Shuttle Challenger disaster in 1986. He has worked on projects for Lucasfilm, IMAX Corporation, NASA, the United States Navy, Hayden Planetarium, Expo Seville, and CNN, to name a few. Serrie's music is also featured in the planetarium theater aboard the Queen Mary II, the world's most advanced cruise ship. Although I have been familiar with Serrie’s music for a long time, I only recently learned that he is a US Air Force Auxiliary mission pilot with advanced instrument and commercial ratings and holds the coveted Disaster Relief Presidential award with Valor
for his flying in the Deep Water Horizon gulf oil spill. He also flies for the Civil Air Patrol as a search-and-rescue pilot.

Day Star is made up of seven relatively lengthy (six to thirteen minutes) tracks that are intended to tell a science fiction story in sound rather than words. Serrie is a master of creating feelings of deep, vast open space where anything (or nothing) can happen. The song titles and poem (in the liner notes) act as a guide to the voyage with timing and sound design elements that emphasize direction and space. This is music that easily slips into the background, creating a peaceful, floating ambience, but listening with full attention will send listeners on a voyage into their own imaginations. Enjoy the trip!

Day Star is available from NewWorldMusic.com, Amazon, and iTunes.
September 2, 2014
This review has been tagged as:
ZMR Winner
Jonn's Website Jonn's Artist Page on MainlyPiano
Album Links
Amazon (referral)iTunes
This site contains affiliate links to products. We may receive a commission for purchases made through these links.