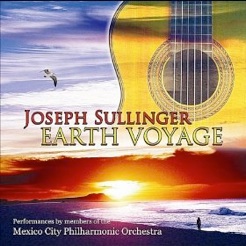 Joseph's Website Joseph's Artist Page on MainlyPiano
Album Links
Amazon (referral)iTunes
This site contains affiliate links to products. We may receive a commission for purchases made through these links.
Earth Voyage
Joseph Sullinger
2011 / Soundship Music
38 minutes
Review by Michael Debbage
Music in the year 2011 has turned into a very compelling year. Many of the major artists have released gripping releases only to have to compete with new discoveries from the lesser known independents. The latter comes in a no less persuasive package courtesy of Joseph Sullinger’s Earth Voyage that effectively weaves and fuses elements of the classical, latin and Nuevo flamenco guitar. Fleshed out by a small ensemble of the Mexico City Philharmonic Orchestra and friends, Earth Voyage is a most impressive musical expedition that will leave you gently but purposefully adrift a gorgeous sea of musical styles.

The album opens with a brief sound of the wind and merges into the melancholy but hauntingly beautiful guitar work of Sullinger that abounds not only on “Drawn by the Wind” but throughout the album. The opening track is immediately followed by the more insistent “Voyage” with Sullinger being a little more urgent on both guitar and bass. This time around sounds of waves carved from a driving vessel through an ocean can be heard gently now and then, only adding to the mystic element of this more progressive song.

The majority of Joseph’s material is set at a mid tempo pace, though “Sailing” is probably one of the albums most reflective moments immediately followed and countered by the more driven “Another World” with the strings and percussion in complete unison with Sullinger’s guitar work. But the most striking and pivotal moment can be found on the slow starter “High Tide” that tenderly transitions into a sublime melody. It is beautiful and breathtaking in its simplicity.

With his two prior efforts paying tribute to classical guitar and Christmas favorites, Earth Voyage is Sullinger’s maiden voyage of exploring his own written material. Unlike the Titanic, there are no icebergs or sinking feelings as Sullinger does a stellar job of creating his own unique style in an environment of accessibility and originality. It should be very interesting to see what Sullinger’s next expedition will be, but while you pass the time enjoy this impressive musical journey.
December 28, 2011
This review has been tagged as:
Guitar musicMichael's Favorites: 2011
Joseph's Website Joseph's Artist Page on MainlyPiano
Album Links
Amazon (referral)iTunes
This site contains affiliate links to products. We may receive a commission for purchases made through these links.
More reviews of Joseph Sullinger albums