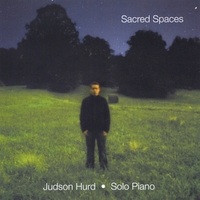 Judson's Website Judson's Artist Page on MainlyPiano
Album Links
Amazon (referral)iTunes
This site contains affiliate links to products. We may receive a commission for purchases made through these links.
Sacred Spaces
Judson Hurd
2008 / Midnight Moon Music
33 minutes
Review by Kathy Parsons
It seems like an unusual number of solo piano hymns collections has come across my desk this year. I’ve enjoyed them all, but I think Judson Hurd’s Sacred Spaces is my favorite. Hurd has arranged ten familiar hymns and praise songs in a variety of styles - from gospel to new age to classical – making this an exceptional sampler of his work. The CD also includes two original pieces - the title track and a composition simply titled “Gospel.” I’ve always been a real fan of blues and gospel piano, and Hurd really handles those styles well – especially since he grew up in Paraguay. Hurd’s bio states that his childhood idol was Philip Aaberg, and I can’t think of a better teacher for a budding artist. By the age of twelve, Hurd was one of the prominent youth pianists in Paraguay, and I can certainly see why – his playing flows from the heart and fingers of a natural. With this debut recording, I can see him rising quickly among the ranks of internationally known solo pianists.

The title track opens the album with a burst of energy and a big, bold piano sound. A short piece, it acts as a prelude to “Great Is the Lord,” which continues in a rejoicing style. I love Hurd’s arrangement of “Amazing Grace” – simple but very much in the gospel tradition with some improvisatory touches thrown in. I think “Jesus Loves Me” is the first hymn most kids learn, and Hurd retains the innocence of the song while filling it out with a somewhat complex arrangement. “Softly and Tenderly” is given a graceful, comforting treatment that sings right to the heart. “This Is My Father’s World” is joyful and spirited, twirling and dancing right out of the CD player! “It Is Well With My Soul” is presented in a more classical style that allows the melody to really sing – breathtaking! “Go Tell It On the Mountain” is a classic gospel piece, and Hurd really does it up right. Hurd’s own “Gospel” closes the CD with a real treat for the ears and the soul – slow, rhythmic, and effortless. Love it!

Sacred Spaces is an incredible debut for this young pianist who now makes his home in North Carolina. I give it a solid two thumbs up!
December 17, 2008
This review has been tagged as:
Debut AlbumsHymn Arrangements
Judson's Website Judson's Artist Page on MainlyPiano
Album Links
Amazon (referral)iTunes
This site contains affiliate links to products. We may receive a commission for purchases made through these links.
More reviews of Judson Hurd albums 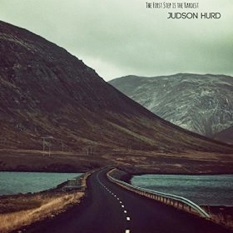 The First Step Is the Hardest (single)
2016
Single Release 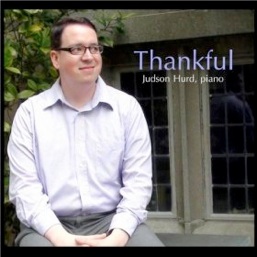