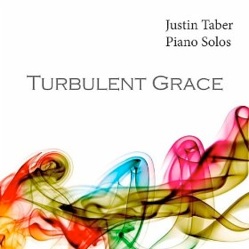 Justin's Website Justin's Artist Page on MainlyPiano
Album Links
Amazon (referral)iTunes
This site contains affiliate links to products. We may receive a commission for purchases made through these links.
Turbulent Grace
Justin Taber
2012 / Justin Taber
66 minutes
Review by Kathy Parsons
I’d be hard-pressed to name another debut solo piano album that has impressed me as much as Justin Taber’s Turbulent Grace has. An engineer working in the medical field, Taber can obviously let go of his technical side and become a brilliant and passionate pianist/composer on his own time. His current bio is a bit sketchy, but it says that Taber started playing the piano at 6 and that he has a condition known as synesthesia. In Taber’s case, musical notes are associated with colors, making his music colorful in more ways than one! That coupled with a dazzling playing technique makes for more than an hour of unforgettable original piano solos that are far too exciting to relegate to background music. Combining classical drama and power with contemporary sensibilities, Taber has a distinctive style that is uniquely his own. The nineteen compositions on the album were composed over a decade or so beginning with his freshman year of college, and there isn’t a weak track among them.

Turbulent Grace begins with the delicate and flowing “See It In Your Eyes,” a sweet love song that reveals a young man’s passion. “Going New Places” is one of the more upbeat pieces, conveying the excitement of discovery and the anticipation of new experiences. The title track has a lot of movement in both hands while the melody is rather spare and simple - a very impressive example of Taber’s control of his instrument. “What Could Have Been” has the feel of a soul crying out at night, sleepless with relentless thoughts and regrets. “The Reach” is a favorite. The melody of this cinematic piece is uncomplicated, but the underlying rhythms and harmonies are complex, sounding like they would require a minimum of three hands. Dark, dramatic, and very emotional, it’s an amazing piece. “Resilience” is another emotional powerhouse that ranges from very dark to more hopeful. Taber’s playing is jaw-dropping! “Last Lullaby” goes in an entirely different direction with its beautiful and soothing tenderness - a poignant contrast to some of the other pieces. In “Royal Beauty Bright,” Taber utilizes a more percussive touch to evoke images of sparkling prismatic colors spinning in the light. “Until the Last Wave Breaks” is gorgeous - intense yet very graceful. “Coalescence” reminds me a bit of “The Heart Asks Pleasure First” from the film The Piano, one of my favorite pieces ever (even though I hated the movie). Passionate and constantly in motion, it’s another favorite.

Reviewing this album and really getting into the music has been a breathtaking experience that I’m anxious to share! Turbulent Grace is available from Amazon, iTunes, and CD Baby. I give it my highest recommendation.
June 18, 2012
This review has been tagged as:
Debut AlbumsKathy's Favorites: 2012
Justin's Website Justin's Artist Page on MainlyPiano
Album Links
Amazon (referral)iTunes
This site contains affiliate links to products. We may receive a commission for purchases made through these links.