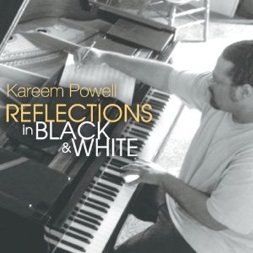 Kareem's Website Kareem's Artist Page on MainlyPiano
Album Links
AmazoniTunes
This site contains affiliate links to products. We may receive a commission for purchases made through these links.
Reflections in Black & White
Kareem Powell
2011 / Sunstrike Entertainment LLC
44 minutes
Review by Kathy Parsons
Reflections in Black & White is the debut CD by Ohio pianist/composer/arranger Kareem Powell. The thirteen tracks are an eclectic selection of original jazz-infused compositions and his arrangements of three traditional folk songs and spirituals. Powell has a very impressive background that dates back to his starting piano lessons at the age of five, and continuing through to a BS in Music Education from Florida A&M University (1998) and a Masters of Music in Music Theory from Indiana University (2001). Since then, his musical activities have shown tremendous versatility - Music Minister, director of musical theater, chorus rehearsal accompanist, adjunct faculty, to name only a few of the items listed on his website. While Powell’s playing is masterful and elegant, he has a strong sense of when to keep it simple. The music is sometimes flowing and sometimes a bit edgy, but it is never difficult to listen to. The multitude of musical genres that Powell has become fluent in have shaped his musical voice into one that is strong and distinctive. I’m impressed!

Reflections in Black & White begins with “Let’s Remember,” an upbeat piece with complex rhythmic changes and a conversational style that suggests that maybe this song has lyrics - an intriguing and inviting opening piece! “Louisa” also has a very strong melody, but the mood of this one is more reflective and somewhat nostalgic. “Walk With Me” is the first of the arrangements. Its gospel/jazz feeling is infectious and demonstrates Powell’s very impressive chops. “Londonderry Air” is a very pleasant surprise. Powell’s arrangement is fairly straight-forward, but played with such heart that it sounds brand new. “Take It Away” is a beautiful ballad and one of my favorite tracks. Flowing and poignant, the melancholy melody and Powell’s emotionally charged playing make this a standout that I could listen to over and over. (sheet music???) Powell’s arrangement of “Deep River” is elegant and heartfelt. “Piano Keys” picks up the tempo and playfully dances all over the piano keyboard. “Demons In My Head” is perhaps the most improvisational and experimental piece on the album. The closing track, “The Sun will Rise Again Someday” is another favorite. I love the haunting melody and dark minor chords, played simply and with abundant grace.

Reflections in Black & White is an exceptional debut, and I look forward to hearing more from Kareem Powell in the future! The album is available from kareempowell.com, Amazon, iTunes, and CD Baby. Recommended!
January 9, 2012
This review has been tagged as:
Debut AlbumsJazz
Kareem's Website Kareem's Artist Page on MainlyPiano
Album Links
AmazoniTunes
This site contains affiliate links to products. We may receive a commission for purchases made through these links.