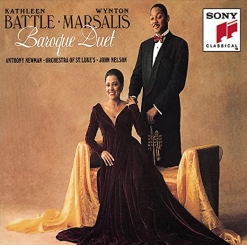 Kathleen's Artist Page on MainlyPiano Wynton's Website Wynton's Artist Page on MainlyPiano
Album Links
Amazon (referral)Apple/iTunesSpotify
This site contains affiliate links to products. We may receive a commission for purchases made through these links.
Baroque Duet
Kathleen Battle and Wynton Marsalis
1992 / Sony Classical
70 minutes
Review by Steve Yip
You know that Sam Cooke song, “Wonderful World,” where he sings, “Don’t know much about history?” And I certainly don’t know a damn thing about opera, Handel, or the Baroque idiom. So why am I reviewing and recommending this peculiar music by an African American opera diva, Kathleen Battle, and a now very renowned jazz trumpeter and bandleader, Wynton Marsalis?

Many years ago in the late ’80s and early ’90s, I worked in ambulatory care in a major teaching hospital. You know, patients when they come in, they need to have a card embossed with their hospital account number, etc, etc, right? Periodically, a technician comes in to service the machines that make these cards or do some emergency surgery to kick a malfunctioning machine back to order. During those days, the main tech who came in was a brother named Rufus (forgot his last name). We always had good conversations about music, mainly about jazz. We would trade stories and insights, but Rufus was usually the guy who "hepped" me to new stuff in what he was checking out.

A couple of years later, I am now working at another teaching hospital. One day I am working my way through the back stairwells from my building into the main hospital building. Guess who I run into? Brother Rufus with his rolling case of tools. He was in this hospital doing the same work and he too was making his way to another part of this hospital. We stopped to catch up.

He mentions that he just bought the new record by Wynton Marsalis with the opera singer, Kathleen Battle. WTF? Really? Now I sort of heard about this, but what’s the appeal? I had NO interest in that sort of music -- What’s in that kind of music? Wynton Marsalis, Juilliard-trained, and coming from a jazz dynasty, was touted as an up-and-coming jazz prodigy who was held up by a lot of people. Some even said he was too young and over-rated. I was skeptical.

“You should check it out, Bro!” Rufus struggles with me to open my mind and expand my repertoire a bit.

Well, after that encounter, I said to myself - Better check it out! I got my hands on it. Played the music, listened to it. The music and operatic vocalization were unfamiliar but beautiful and sometimes eerily so, and Wynton’s trumpet was clean and crisp in delivery. Soon enough, I’d put it on every Sunday morning when I sat down to do my weekly finances. Sort of like getting into a zone listening to Miles Davis’ Kind Of Blue when I have to read or write. Puts one into the right frame of mind.

Have I learned anything about Baroque classical music? Not much, but I do know I appreciate Baroque Duet. Check this review from Amazon that I pulled down. I don’t know much about the baroque idiom, but J. McDonald, this dude or dudette, from the UK seems to know and can speak for me: “It is an excellent, well-considered and beautifully performed programme of arias; a very interesting selection that includes – aside from the fairly familiar Handel and Bach items – pieces by Alessandro Scarlatti, Predieri and Stradella... It isn't a period instrument recording, but both artists understand and are perfectly conversant with the baroque idiom and their interpretations are exemplary - they complement each other very well.” Nuff said... is it Sunday yet?