Kathryn's Website Kathryn's Artist Page on MainlyPiano
Album Links
Amazon (referral)iTunes
This site contains affiliate links to products. We may receive a commission for purchases made through these links.
There Was a Time
Kathryn Kaye
2016 / Overland Mountain Music
48 minutes
Review by Kathy Parsons
Kathryn Kaye returned to Will Ackerman’s Imaginary Road Studios to record her fifth album, There Was a Time. Ms Kaye’s velvet touch on the piano keys has never sounded better, with and without the outstanding musicians from Ackerman’s studio. The music on this album was largely inspired by songs that were played and sung in the mountains of southeastern Kentucky years ago. The melodies from some of those songs were combined with new ones to reflect the passage of time and to express the various emotions that have affected humankind throughout history. From the light and carefree “Spring Snow” to the intense and ominous “Darkening Skies,” Kathryn Kaye takes the listener on a vivid journey to other places and times, creating colorful images and telling stories in a musical language easily understood by anyone willing to listen with an open heart. Ms Kaye’s previous four albums have all been included in my annual Favorites lists, and There Was a Time is likely to do the same.

The sweet and gentle “Saro Remembered” is an arrangement of a traditional folk song called “Pretty Saro.” It begins as a piano solo and evolves into a gracefully flowing trio for piano, cello (Eugene Friesen) and English horn (Jill Haley) - such a beautiful opening piece! “Arise” is Kaye’s interpretation of an old hymn from her childhood. The poignant and haunting melody is made even more perfect with Charlie Bisharat’s soulful violin - breathtaking! The title track is a tenderly nostalgic duet for piano and cello - simple and heartfelt. Kaye’s fingers dance lightly on the piano keys for the breezy “Spring Snow,” which also features cello, English horn, bass (Tony Levin), and French horn (Gus Sebring). Kaye’s touch is so velvety smooth and expressive on “Wind in the Aspen Grove” (one of two piano solos on the album) that I wish there were a few more solos. “Shadow of a Bird in Flight” is a darkly beautiful ensemble piece that features Will Ackerman on guitar and percussion in addition to the piano, violin, bass, and French horn. “Revival” begins with an English horn solo that evokes visual images of open spaces and innocent times. The rest of the piece is a gentle yet colorful piano solo with a strong melody not unlike older hymns and folk ballads. As its title suggests, “Learning to Waltz with Clouds” is light, dreamy, and very expressive. Piano, English horn, French horn, and bass create a sunny daydream set to music. I love “Bittersweet Goodbye,” the other piano solo on the album. A minor key waltz, the melody comes straight from the heart - gorgeous and so expressive! The closing track, “Darkening Skies,” is quite different. The repeated patterns on the piano are very somber and mysterious, and Friesen’s cello enhances the dramatic and foreboding qualities of the piece - a powerful ending to a fantastic album!

January 31, 2016
Kathryn's Website Kathryn's Artist Page on MainlyPiano
Album Links
Amazon (referral)iTunes
This site contains affiliate links to products. We may receive a commission for purchases made through these links.
More reviews of Kathryn Kaye albums 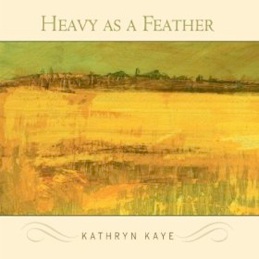