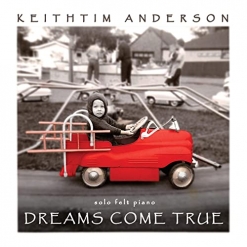 KeithTim's Website KeithTim's Artist Page on MainlyPiano
Album Links
Amazon (referral)Apple/iTunesSpotify
This site contains affiliate links to products. We may receive a commission for purchases made through these links.
Dreams Come True
KeithTim Anderson
2021 / Kamsongs Music
43 minutes
Review by Kathy Parsons
Dreams Come True is the second solo piano album by KeithTim Anderson and is one of the four albums nominated for the 2021 Whisperings Solo Piano Radio Album of the Year award. The ten original tracks were composed and recorded in 2019 and 2020 using the unique sound of a one-string-per-note felted piano along with reverse reverb. (If you aren't familiar with felted pianos, it is a technique where felt or another soft cloth is placed between the strings and hammers inside the piano to soften the percussive effect of the hammers hitting the strings. Sometimes the microphone(s) is/are placed in such a way that the various sounds of the piano action become part of the music. On this album, some of the action can be heard, but no clicks or creaking sounds - they are more of a whisper.) Like KeithTim's first piano album, Waiting's End - Solo Piano, Vol. 1 (2018), each piece has a Bible verse paired with it in the liner notes as well as on KeithTim's website. The charming cover photo is the perfect introduction to the warm, uplifting and sometimes magical music on this excellent album.

KeithTim Anderson spent many years as a successful songwriter and vocalist, often playing the piano to accompany himself, but not composing solo piano music per se. In late 2017, he wrote a piano piece he really liked, quickly followed by another. In November of that year, he traveled to Wisconsin to give a Thanksgiving concert at his parents’ church, but lost his voice to laryngitis. Unable to sing, he played the two piano pieces instead and they were very well received. When KeithTim returned to Nashville, he continued to compose piano solos and found himself really enjoying the process. The end result was Waiting's End, which was also nominated for Whisperings Album of the Year!

Dreams Come True begins with the title track, a light, beautiful piece that overflows with sweet innocence. Much of the piece is played in the upper octaves of the piano and the felting gives it the sound of a toy piano - very heartwarming! I'm not sure how "reverse reverb" works, but it gives "Evermore" a delicate, shimmering effect that suits the gentle nature of the piece. "Beyond the Darkness" has a more reflective feeling, looking inward for answers or, perhaps, in prayer. Light and carefree, "Once Upon a Daydream" soothes like a happy fantasy bathed in sunshine and soft pastel colors. It's really interesting how the strings ringing and the reverse reverb in "The Door" give it an otherworldly feeling that is both inviting and safe. "Yet Joyful" expresses a lightness of spirit and a sense of calm that we could all use more of in these troubled times. "Where Love Is" was inspired by a paraphrased verse from the book of Proverbs that says: "Better a simple meal where love is, than a feast where there is hatred." A beautiful mix of simplicity and contentment runs through every note of this lovely piece. "Now I Lay Me Down to Sleep" expresses the sincerity and innocence of a young child's bedtime prayer. Played in the upper octaves of the piano keyboard, "And We Dance" gives the impression of a dreamy waltz perhaps played on a music box or even a white, fluffy cloud. The album closes with "There Is a Tree." The paraphrase in the liner notes is from Revelation and says, "...there grew the tree of life ... and the leaves of the tree were for the healing of the nations." Hopeful words in a time of great need.

Dreams Come True is very deserving of its "Album of the Year" nomination and is available from KeithTim's website, Amazon, Apple/iTunes, and streaming sites such as Spotify. Very highly recommended!

February 28, 2022
This review has been tagged as:
Latest ReviewsWhisperings 2021 Album of the Year Nominees
KeithTim's Website KeithTim's Artist Page on MainlyPiano
Album Links
Amazon (referral)Apple/iTunesSpotify
This site contains affiliate links to products. We may receive a commission for purchases made through these links.
More reviews of KeithTim Anderson albums 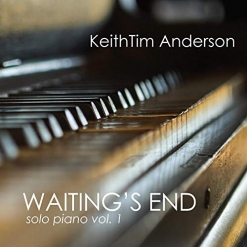