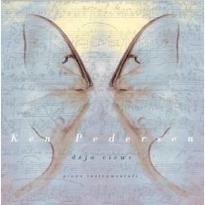 Ken's Website Ken's Artist Page on MainlyPiano
Album Links
Amazon (referral)iTunes
This site contains affiliate links to products. We may receive a commission for purchases made through these links.
Deja Views
Ken Pedersen
1999 / Symark Records
53 minutes
Review by Kathy Parsons
Ken Pedersen has taken inspiration from twelve well-known classical pieces and created original works from them. This is a little audacious when you think about it, but Pedersen has created a real masterpiece! I expected actual arrangements of the various classics, but most tracks only hint of their original sources, and the new compositions are fresh and contemporary. This isn’t “Switched-On Bach ‘99” by any stretch of the imagination! Several of the pieces are augmented with synth instrumentation, two are duets with cellist Judy Stone, and several were improvised in the studio to reflect Pedersen’s performing style. I’ve been hearing some incredible piano CDs lately, but this one rises right to the top.

The “inspirations” come from all eras of piano music from Bach and Handel to Philip Glass, and the titles reflect significant moments in life. There are several favorite selections, but “Quest” is such a soaring and yet gently flowing duet for piano and cello that I think it’s my top pick; its inspiration came from a rhythmic pattern used by Glass. Another real stand-out is the lively “Mind Candy”, inspired by the Shaker melody, “Simple Gifts” - a joyous romp for piano and wind quartet that reminds me a little of Ray Lynch’s “Celestial Soda Pop” in its buoyancy. I had doubts that anyone could bring anything new to the Pachelbel “Canon”, so “Reunion” was a delightful surprise! “Autumn Rose” is also a fun discovery with Pedersen’s joining of MacDowell’s “To a Wild Rose” and Foster’s “O Susanna”! The two themes run in and out of Pedersen’s piano improvisation and work perfectly together. “Tomorrow’s Memory” was inspired by the often-murdered “Moonlight Sonata” (it’s a piano teacher talking here!); the flowing triplets in the bass are about the only recognizable part of the original, and Pedersen’s expressive touch and emotional power make this an incredible piece. Wow! Each piece is strong and lovingly crafted in its own right, and the CD as a whole has a wonderful flow with warm, soothing qualities that should satisfy fans and non-fans of classical music. This is one of the best CDs I’ve heard!

Sound-clips and ordering info at kenpedersen.com.
April 9, 1999
This review has been tagged as:
Kathy's Favorites: 1999
Ken's Website Ken's Artist Page on MainlyPiano
Album Links
Amazon (referral)iTunes
This site contains affiliate links to products. We may receive a commission for purchases made through these links.
More reviews of Ken Pedersen albums