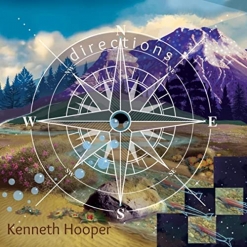 Kenneth's Artist Page on MainlyPiano
Album Links
Amazon (referral)iTunesYouTube
This site contains affiliate links to products. We may receive a commission for purchases made through these links.
Directions
Kenneth Hooper
2020 / Astral Wolf Records
80 minutes
Review by Kathy Parsons
Directions is the first album by Kenneth Hooper under his own name, but he has also recorded with several groups and three of his pieces are on the album Journeys in Sound Healing (2017) by Gian Berselli, the founder of Astral Wolf Records. Hooper is a world flute artist who enjoys creating music for relaxation. Using a variety of Native American, Pueblo style and Chinese Xiao flutes, his goal is to take listeners on a musical journey inward toward peace and well-being. Directions is a two-disc set with nine tracks that range from just under five minutes to over twelve. The core of all of the music is improvisation by Hooper and Gian Berselli. The improvisations were recorded first, and then Berselli added more instrumentation and nature sounds. Hooper plays fourteen different flutes on the album as well as Rav Drum, Udu and vocals. Berselli plays acoustic guitars, bass, vocals and keyboards.

I asked Hooper about the album’s title, and he said: “In life there are many directions you can take and on this CD, hopefully, the journey is one from the external world to the universe within.” The album emerged from two “bookend” experiences. The first was when his partner’s mother died. “I played flutes at her bedside and I could see the soothing effect the flutes had on not only her mother but on the family, too. This set me on a certain trajectory that landed me in a nine-month certificate program at The California Institute of Integral Studies in San Francisco called “Sound, Voice, and Music in The Healing Arts.” (This is where I met Gian Berselli.) At the end of this program, my other bookend experience happened: my father died. I was able to sit at my dad’s bedside and offer my creativity to a man that never understood the value of creativity. The soothing improvisations helped him and my family find peace in a difficult time and it was one of those full circle moments for me.”

While all of the music on Directions is on the quiet, soothing side, there is a beautiful variety from one piece to the next. The title track opens with the sounds of a hand drum and flute with nature sounds behind them. Three different Native American flutes are used in this “medicine melody” which also includes wordless vocals by Hooper and Chelsea Kirby - a heartfelt and emotional beginning! “All Who Wander” was released as a single ahead of the album release and features a Chinese Xiao flute as well as guitar, bass and hand percussion. Smooth, peaceful and relaxed, it’s one of my favorites. “Trailblazers” is a bit more upbeat and brings some beautiful guitar work to the front along with two Native flutes. “Springtime Dreaming” features a Xiao flute accompanied by guitar and light percussion. Very light and ethereal, it’s easy to picture a seedling emerging from the ground as a warming sun encourages new life. I really like this one, too! “Within” becomes more meditative. Hooper plays a hybrid prayer rock flute with ambient keyboard and nature sounds providing atmosphere. “Coming Home” also features a prayer rock flute, piano/keyboard, strings and ambient ocean sounds - very peaceful, serene and welcoming. “Graceful Expanse” has Hooper playing Rav drum as well as a Mojave flute and is probably the most “new age” piece on the album - also very calm. “From the Deep” includes the sounds of whales and the ocean. Hooper plays three flutes, including a bass flute, with ambient keyboard washes enhancing the tonal colors and slow movement of the piece. Crows are thought to be “Omens of Change” and this piece expresses hope that the changes we are currently experiencing are going to be for the better. Sweeping strings give the piece a visual, cinematic quality that brings the album to a peaceful close even though the sound of crows calling drives my cats crazy!

Directions is a very uplifting musical experience as well as a calming and beautiful one. It is available from Amazon, iTunes/Apple Music and CD Baby as well as the streaming sites.
March 18, 2020
This review has been tagged as:
Debut AlbumsKathy's PicksOther Solo Instruments
Kenneth's Artist Page on MainlyPiano
Album Links
Amazon (referral)iTunesYouTube
This site contains affiliate links to products. We may receive a commission for purchases made through these links.