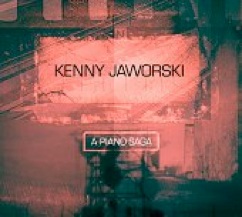 Kenny's Website Kenny's Artist Page on MainlyPiano
A Piano Saga
Kenny Jaworski
2006 / Kenny Jaworski
37 minutes
Review by Kathy Parsons
Kenny Jaworski’s debut album, A Piano Saga, was recorded live in concert in April 2005 on a 9’ Steinway concert grand, and that’s about the only thing about this album that isn’t mind-blowing. The twenty-seven-year-old St. Louis pianist is not only opening new doors in piano music - he’s blasting them open! As he told me in an introductory email, his music “isn’t new age, but it’s new.” It is impossible to classify this music because it’s so different, but Jaworski seems to be getting the most notice from the classical camps, at least initially. There are abstract, free-form jazz elements as well, but Jaworski tells me that very little of this music is improvised. Passionate, intense, and sometimes kind of wild, I certainly haven’t heard any other pianists performing this kind of music. It can take some getting used to, but I hear something new each time, and I’ve probably listened to this CD at least a dozen times. Jaworski is mostly self-taught, and I’d say he is quite an amazing teacher! His flying fingers are jaw-dropping, and Jaworksi’s musical message is unique. I’m very excited about getting to know this artist at an early point in his career!

The first three tracks are among my favorites. The opening track, “The First One,” is rhythmic and intense, and gives a strong indication of what’s to come. At just over a minute, this is a prelude of sorts. “It Begins Again” continues the intensity, but is more developed. Jaworski’s hands fly all over the piano keyboard with sometimes dancing notes and sometimes crashing octaves; I really like the main theme of this piece. “The Mystique Factor” is my favorite piece on the CD. Rhythmic and energetic, it also seems to contain an element of humor. I love the mysterious passages in the deep bass and the way the piece just sort of drifts off at the end. “Dimensions” is bright and sparkling, and has several themes that develop over the course of the piece - some very fast and crisp and others a little quieter. “Ballerina’s Blues” is about a dancer who has to quit because of an injury. Some of this piece has a grace about it, and you get a sense of a ballerina on her toes, dancing across the stage, but there is also the anger and frustration with the injury. It’s a fascinating piece! “Games People Play” is one of the more subdued pieces, but it is also very intense. Beginning in a more relaxed style, Jaworski just sort of wanders around the piano keyboard, setting the tone. The pace quickens, but the piece remains light and dancing. As the piece develops, it becomes more agitated and powerful to a peak, and then softens a bit to a gentle and compelling resolve. As the title implies, “Grace” is a bit quieter and more reflective. “House of Doubt” is another favorite. Very dark and brooding, Jaworski seems to be working through his demons here, giving us some insight into a very personal realm that most of us can identify with - a very impressive piece!

As you can probably tell, A Piano Saga is not music intended for massage or meditation. It is, however, cutting edge and dramatically original. If you are looking for an adventure in new piano music, Kenny Jaworski is your man! The CD also comes with a DVD of Jaworski’s performance of four of the pieces at the concert where the recording was made. This addition gives fascinating insight into the music and the artist. A Piano Saga is available from myspace.com/kennyjaworski.
June 6, 2006
This review has been tagged as:
Debut Albums
Kenny's Website Kenny's Artist Page on MainlyPiano