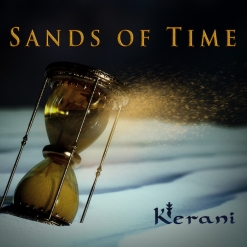 Kerani's Website Kerani's Artist Page on MainlyPiano
Album Links
Amazon (referral)SpotifyiTunes/Apple
This site contains affiliate links to products. We may receive a commission for purchases made through these links.
Sands of Time
Kerani
2020 / Kerani Music
61 minutes
Review by Kathy Parsons
Sands of Time is a stunning new album from Dutch composer and multi-instrumentalist Kerani, whose previous albums, Arctic Sunrise (2014) and Small Treasures (2018), were awarded the Zone Music Reporter Best Neo-Classical Album of the Year awards for those two years. I would expect no less for Sands of Time, which was inspired by Greek mythology and the most beautiful elements of life on earth: Love, Wisdom, Beauty and Light. All eleven tracks were composed and orchestrated by Kerani, and her piano and synthesizers are backed by a live string ensemble, a vocalist and a few guest musicians. With her extensive background in scoring music for documentaries, short films and trailers as well as for museums, exhibitions and guided tours, it is no surprise that Kerani's music is very visual and deeply expressive. To date, she has released seven albums and twelve singles, and her music is regularly performed by European orchestras as well as being aired on national television.

I think Kerani herself best describes the album and her intentions with the music: “The myths and legends of the ancient Greek may be archaic, but their human aspect is still valid. We should use our love and knowledge to create beauty and to bring peace in the world. We should also listen to the voices of the past and take time for reflection. Only then will we be able to enjoy the precious gift of life to the fullest.”

The album begins with the title track, a piece that expresses the constant change that is such a big part of our lives and why it is so important to be present and conscious of the many gifts and good things around us all the time. Gently majestic with full orchestration, piano and choral voices, this opening piece lets you know right away that Sands of Time is going to be something very special. “Shores of Gold” is smooth and dreamy, caressing the mind with graceful strings, piano and guitar. “When the Night Comes” features Max Jeschek on guitar along with strings and light orchestration. A beautiful nocturne, the piece describes the gentle moments before falling asleep, drifting into dreams knowing that all will be well. “Endless Skies” becomes much more spacious and ambient with a simple melody on piano and sometimes guitar to describe the feeling of soaring through the air on the power of your own wings, watching the world from above. I love this one! The “Touch of Love - Prelude” and “The Touch of Love” become even dreamier and more ambient as they tell the creation story through the eyes of Eros, the God of Love. The piano leads the full symphony on this one with a powerful grace as well as a sense of wonder. “Road to Wisdom” is another favorite. It acknowledges that the road to wisdom is long and hard, and is paved with many difficulties and challenges. A powerful sense of determination and the drive to keep moving forward no matter what propel this magnificent and inspiring piece. Expressed with dramatic piano, strings, choral voices and other symphonic instrumentation it’s a real standout! “Muse” was inspired in part by this wonderful quote by Rob Brezsny: “All of us need to be in touch with a mysterious, tantalizing source of inspiration that teases our sense of wonder and goads us on to life’s next adventure.” What an uplifting close to this incredible album!

If you haven’t yet discovered Kerani and her music, Sands of Time is an excellent reason to do so! Fans of her previous albums will love this one, too! The album is available from Amazon, iTunes/Apple Music, and streaming sites such as Spotify. Brava!
October 2, 2020
This review has been tagged as:
ZMR Winner
Kerani's Website Kerani's Artist Page on MainlyPiano
Album Links
Amazon (referral)SpotifyiTunes/Apple
This site contains affiliate links to products. We may receive a commission for purchases made through these links.
More reviews of Kerani albums 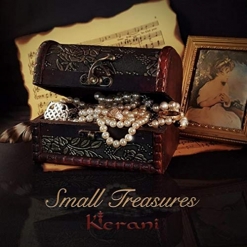