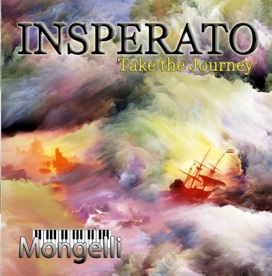 Kevin's Website Kevin's Artist Page on MainlyPiano
Album Links
Amazon (referral)iTunes
This site contains affiliate links to products. We may receive a commission for purchases made through these links.
Insperato: Take the Journey
Kevin Mongelli
2014 / Mongelli Music
54 minutes
Review by Kathy Parsons
Insperato: Take the Journey by pianist/composer Kevin Mongelli is a combination of one new release (the 19-minute title track), four tracks from Fort Lonesome (2012) and two from Ascension (2009). Like Mongelli’s earlier work, this album is bold and dramatic with moments of tenderness and grace. A classically-trained pianist with a music degree from Duquesne University, Mongelli plays with strength and confidence without being overly showy, telling stories and expressing emotions by way of his fingertips on the piano keyboard. His previous release, Fort Lonesome, garnered a number of awards and nominations from the Indie Music Channel Awards and the Global Music Awards, so Insperato is something of a “best of” album as well as a showcase for Mongelli’s dazzling new piece. All seven tracks are solo piano.

The album begins with the title track, a pianistic tour de force that is both powerful and eloquent. A multi-movement work, “Insperato” begins with a dark octave progression in the bass of the piano that expands into the treble as it unfolds. The second theme alternates between a soft-spoken melody and darkly mysterious responses that build in intensity, eventually becoming one voice. Mongelli chose the cover artwork of a ship in turbulent seas for a reason! Over the course of the 19-minute journey, we encounter challenges that seem insurmountable, moments of shimmering beauty and calm, passion, danger, frustration, peaceful reverie, and triumph. Several themes recur throughout the piece, keeping it cohesive as it goes through many changes in color and intensity. Well done! “Beyond the Heart” is more of a passionate ballad. “Darker Days” is Mongelli’s best-known and most-celebrated piece (so far!). Intense and very classical in styling, it brings to mind what Liszt or possibly Beethoven might be composing if they were alive today. I also really like “Train To Despair,” a potent emotional expression that pours out from somewhere deep within. “The Sunrise Waltz” is much lighter and more flowing while remaining very expressive. “Unafraid” was my favorite track from Fort Lonesome and makes a great closing for this album. Strength and fierce determination are the words that come to mind while listening to this piece and it seems to be offering hope and encouragement. Powerful stuff!

If you are new to Kevin Mongelli’s music, be sure to check this one out! Insperato: Take the Journey is available from mongellimusic.com, Amazon, iTunes, and CD Baby.
July 20, 2014
Kevin's Website Kevin's Artist Page on MainlyPiano
Album Links
Amazon (referral)iTunes
This site contains affiliate links to products. We may receive a commission for purchases made through these links.
More reviews of Kevin Mongelli albums 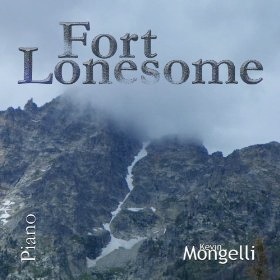