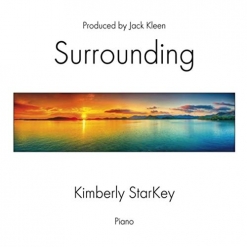 Kimberly's Website Kimberly's Artist Page on MainlyPiano
Album Links
Amazon (referral)iTunes
This site contains affiliate links to products. We may receive a commission for purchases made through these links.
Surrounding
Kimberly StarKey
2015 / Kimberly Starkey
38 minutes
Review by Michael Debbage
Pianist Kimberly StarKey was introduced by way of her musician friend and peer Jennifer Thomas courtesy of her appearance on the title track of Thomas’s album The Fire Within. However take note that Kimberly StarKey was also mentioned as a peer, in that her last full length album Surrounding keys in on some star qualities that will bode well with this up and coming pianist.

Kimberly’s first full length album dates back to 2013 when she released Dream. It featured twelve stripped down self composed and produced piano songs and performances. The latter was more obvious on the opening track “Beyond The Darkness” but the album also included some beautiful songs such as “Zinnwaldite Sonatina”. Fast forward to 2015 and Surrounding has StarKey partially surrendering the producer chair to Jack Kleen. She has also surrendered some of the improvisational spirit embracing a little more structure and embellishments to her compositions. In fact the album opens with the gorgeous rhythmic “Capsuled Morning”.

While Surrounding continues to focus on the piano pleasures of StarKey, this time around she does not hesitate to use sound that only further embellishes her music. Fast forward to the startling “Coronation” that musically builds into a majestic crescendo only to slow to a subtle end. This is a perfect segue into the seductive rhythms of “Over” that will teasingly want you to listen to it over and over. Meanwhile the embellishments of the mystical title track bookends “Over” perfectly.

The album Surrounding closes with the reflective “Be Glad It Happened” on a very thoughtful note. But considering the very bold marketing move of renaming herself the Rogue Pianist this is certainly not the last we have heard from Kimberly StarKey. And while Surrounding is a solid album, it is going to be really interesting as to what the future holds for this up and coming pianist. Stay tuned!
December 31, 2018
Kimberly's Website Kimberly's Artist Page on MainlyPiano
Album Links
Amazon (referral)iTunes
This site contains affiliate links to products. We may receive a commission for purchases made through these links.